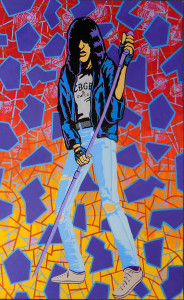 Yesterday the Brooklyn Jewish Art Gallery had an opening for their monthlong “Jews and Rock” art exhibit, also billed as “The Rebellious and Creative Energy of Jews with Guitars.” Inside a synagogue’s sanctuary, an impressively varied art show featured photographs and paintings of Jewish musicians, including Joey Ramone, Amy Winehouse, and members of Anthrax and the Beastie Boys. Going beyond the visual art, punk took center stage. One of the two presentations yesterday was a panel discussion about the role that Jews played in the ’70s New York punk scene, and the art show’s closing event will be the book launch for my brand-new book, Punk Rock Hora.

The opening kicked off with the punk panel, featuring Steven Lee Beeber, author of The Heebie-Jeebies at CBGB’s; Andy Shernoff, founder, songwriter, and bassist of the Dictators; Max Gottfried, the curator of the “Jews and Rock” art show; and John Holmstrom, the founding editor of PUNK Magazine. 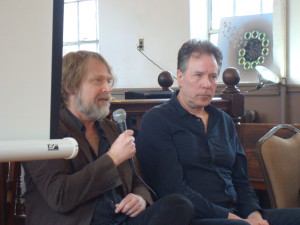 Not surprisingly, the discussion eventually turned to the use of Nazi rhetoric and imagery by ’70s punk artists, including Jews. The Ramones’ “Today Your Love, Tomorrow the World” and the Dictators’ “Master Race Rock” came up as examples.

Beeber explained, “It’s a defense mechanism, or a coping mechanism, working through the horror and treating it—Nazi imagery—with irony and appropriating it and making fun of it. Like, We now own this, and we see how absurd Nazism was.” 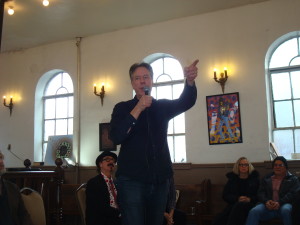 When I was a kid, the Holocaust was not that far away. I was born in the ’50s. My father fought in World War II; he was shot in World War II. My grandparents escaped Russia—actually Belarus—in the early 1900s. … Concentration camps—it was always something on my mind. I think it was a way to own it, the way … homosexuals take “queer.” They owned “queer”—it used to be you put somebody down. Now if they own it, you can’t put them down by saying it. So the Holocaust was never far away when I was growing up. … It was all a way to deal with the tragedy and the pain.

I wouldn’t say that punk rock bands’ edgy takes on the Holocaust are equivalent to the LGBT community reclaiming “queer,” but I get what Shernoff was going for.

I enjoyed seeing Shernoff and Holmstrom, two familiar names, speak for the first time. It was great catching up with Beeber, whom I have long been in touch with but hadn’t seen since we gave a joint presentation about Jews and punk at LimmudBoston in 2013. The other presentation, about Beatles manager Brian Epstein, was quite interesting; it was given by Vivek Tiwary, a theater producer whose shows, including Green Day’s American Idiot, have won 25 Tony awards.

The opening had a fantastic vibe. Dozens of people attended, and everyone seemed to have fun listening to the presentations and checking out the art on the walls. I brought books without even knowing if I’d have the opportunity to sell them, and I wound up selling more books than at any single event other than the Oy Oy Oy Gevalt! book release party. Based on book sales as well as conversations with people who stopped by to take a look at my books, it was clear this was a fitting, engaged, enthusiastic audience! 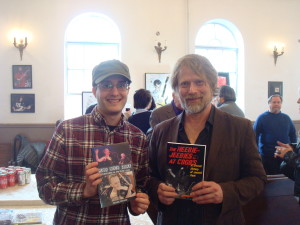 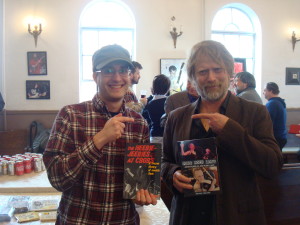