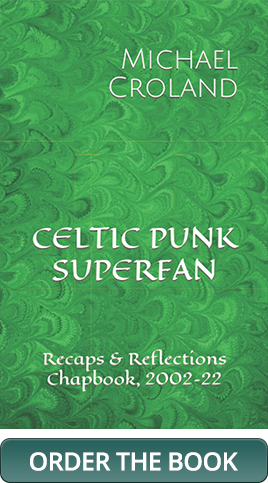 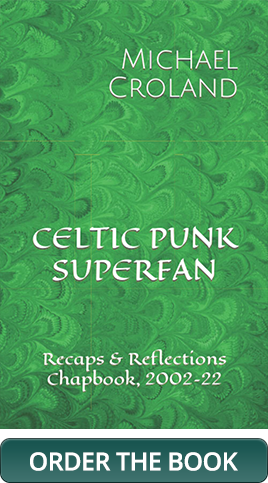 “This is a brilliant little book. Michael Croland is an expert in Celtic Punk and here he brings the genre to life with his passionate insight and thorough research. He covers the well-known acts as well as the lesser-known . . . . His enthusiasm matches the furious intensity of the bands he celebrates.” —Michael Mary Murphy, Irish music historian

“This one is for die-hard fans, by a die-hard fan. . . . The author has definitely done his homework. . . . You can feel the energy coming off the page. . . . This is a groundbreaking chapter. . . . All in all, it was never just about The Pogues, or Flogging Molly, or the Dropkicks. Celtic punk has reached far and wide, and the scene remains healthy with different bands and fans springing up all over the world. Michael has put his heart and soul into a book about his love of the genre, and his own personal take on it. The book is also well edited and presented.” —London Celtic Punks

“The first book written on the genre of Celtic-punk. … The essays are very well written and bring back fond memories to me of the early days (i.e., the 2000’s) of Celtic-punk. What is particularly insightful is that Michael is coming at this from a strong Jewish-American background and it goes to prove you don’t need a drop of Irish blood to be a Celtic punk Superfan ….” —Shite ‘n’ Onions

Grab two pints o’ stout, turn up the dial, and swing on the devil’s dance floor!

Over the past two decades, Michael Croland has been a Celtic punk superfan and wondered whether he was Irish in another life. He wrote about Flogging Molly and the Dropkick Murphys for his college newspaper, incorporating original interviews with members of both leading Celtic punk groups in their prime. He explored why a Jew might connect to Celtic music so strongly. After writing two books about Jewish punk, he praised Celtic punk as the gold standard of ethnic punk. He showed how far the genre has come by covering a wide range of St. Patrick’s Week livestreams during the pandemic era, proving that Celtic punk is vast, varied, and vibrant.

After attending dozens of concerts and spending countless hours rocking out to the music, Croland collects his recaps and reflections about Celtic punk since 2002. Celtic Punk Superfan places his articles and the genre in context with a personal Preface and an informative Introduction that connects the dots of scholarly literature and band biographies. This anthology celebrates the full glory of the Celtic punk rainbow, from the progenitor Pogues and commercial juggernauts to second-tier old faithfuls and obscure Latin American artists. It’s a passion project from someone who fell for the music, rode the wave to his primary niche as a writer, and never forgot his first love in the realm of ethnic punk.

With blaring bagpipes, soaring fiddles, high-pitched mandolins, twangy banjos, and pummeling guitars, Celtic punk puts the rock back in “shamrock.” This chapbook will make you want to start jig-moshing in your living room. Sláinte!

Michael Croland is the author of Oy Oy Oy Gevalt! Jews and Punk, Punk Rock Hora: Adventures in Jew-Punk Land, and Air to the Throne: A Poetry Chapbook about Air Guitar.

Related Blog Posts since the Book Was Published