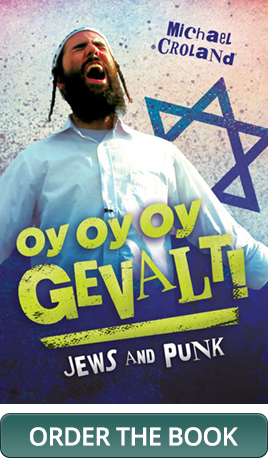 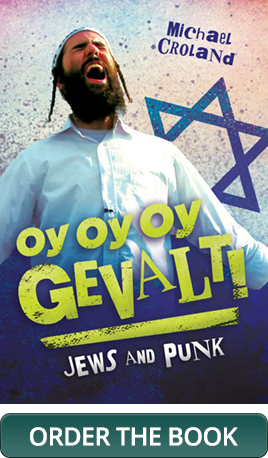 Step inside a fascinating world of Jews who relate to their Jewishness through the vehicle of punk—from prominent figures in the history of punk to musicians who proudly put their Jewish identity front and center.

Many key figures in punk’s history—including members of the Ramones, the Dictators, the Clash, Bad Religion, and NOFX—were Jews.

Why did punk—a subculture and music style characterized by a rejection of established norms—appeal to Jews? How did Jews who were genuinely struggling with their Jewish identity find ways to express it through punk rock? Oy Oy Oy Gevalt! Jews and Punk explores the cultural connections between Jews and punk in music and beyond, documenting how Jews were involved in the punk movement in its origins in the 1970s through the present day.

Author Michael Croland begins by broadly defining what the terms “Jewish” and “punk” mean. This introduction is followed by an exploration of the various ways these ostensibly incompatible identities can gel together, addressing topics such as Jewish humor, New York City, the Holocaust, individualism, “tough Jews,” outsider identity, tikkun olam (“healing the world”), and radicalism. The following chapters discuss prominent Jews in punk, punk rock bands that overtly put their Jewishness on display, and punk influences on other types of Jewish music—for example, klezmer and Hasidic simcha (celebration) music. The book also explores ways that Jewish and punk culture intersect beyond music, including documentaries, young adult novels, zines, cooking, and rabbis.

“Michael Croland’s indefatigable research has revealed that the Jewish/punk crossover is broader and deeper than most people would ever have expected. This fascinating book takes the reader on a journey from Jewish members in punk stalwarts such as the Ramones and NOFX, through jokey Jew-punk projects such as Yidcore and Jewdriver, to klezmer/punk explorations such as Golem. Croland succeeds in demonstrating that Jewish punk is not a footnote to Jewish or punk history, but a source of fruitful and playful provocations in both worlds.” —Dr. Keith Kahn-Harris, Author of Extreme Metal: Music and Culture on the Edge and Judaism: All That Matters

“This comprehensive look at Jews in Punk is a revelation. Croland digs deep to explore notions of identity through art. Never mind the smoked lox, this is a mazel tov cocktail hurled in the face of conventional history.” —Steven Lee Beeber, Author of The Heebie-Jeebies at CBGB’s: A Secret History of Jewish Punk

“My nominee for ‘If you only read one book about Jews in Punk.’ … Very early in the book there is a retelling of info regarding The Ramones, The Dictators &co in the embryonic days of punk, but this is ‘scene setting’ for the stories that comprise the rest of the book. Stories of punk bands of all types, punk-influenced scenes (Klezmer revival, Radical Jewish Culture etc), zines, films, internet chefs, Rabbis—that’s right, Punk Rock Rabbis!—all are here in a very well written book that will have you reaching for the music streaming service of your choice so you can hear the bands you’re reading about. A welcome bibliography is included for further reading, as well as a handy glossary of Jewish terms for bewildered goyim like me.” —Goodreads

“It’s a wonderful book and Michael’s the authority on the … natural convergence between Jewish culture and punk music.” —Johnny Negotiable, Soundings, KRRN Juneau

“Now THIS is a book! Just because I’m an all-buttoned-up religious Jewish lady, in middle-age, doesn’t mean that I wasn’t a punk rocker back in the day. Somehow this book popped up as a recommendation to me to read, so I got it from the library, loved it, and bought my own copy online. Who knew that so many punk rockers were Jewish, and who knew that they referred to Judaism so much in their songs? I’m not stepping back into that world, but it’s a fun read, certainly nostalgic, and I’ll listen to the songs if I can find them. Be forewarned, I might be playing The Clash as I make the potato kugel!” —Goodreads

“This quite erudite, serious piece on the world of Jewish punk in a cultural context and an intellectual way.” —Bram Presser, singer of Yidcore

“Croland’s work outlines the past, present, and future of Jews and the punk movement. But in a larger sense, Oy Oy Oy Gevalt! Jews and Punk gives us the framework for understanding what happens when the esoteric becomes the mainstream, whether that’s a 6,000-year-old spiritual family or the sound of three chords played loudly and poorly.” —Rabbi Patrick “Aleph” Beaulier, Executive Director, PunkTorah

“After digging through articles, defunct websites, and old cassette tapes, Croland compiled this absorbing ethnography of Jews in punk music. He profiles a ragtag collection of singers, guitarists, writers, and filmmakers who affiliate with the punk counter-culture. … Whether you’re a Jewish punk yourself, or just curious about this fascinating sect, Oy Oy Oy Gevalt offers a riveting portrait of the most underground of subcultures.” —Matthue Roth, Author of Never Mind the Goldbergs, Jewniverse review

“I am one hundred percent certain that there are very few, if any, who would think of punk and Judaism in the same sentence. At least so I thought until I read Michael Croland’s book. … I had no idea how many different bands and variations there are and I found it especially interesting to read about the backgrounds, motivations, and influences of the artists throughout the book.” —Reviews by Amos Lassen

“Jews and punk. Two words that can seem contradictory, and yet . . . Michael Croland shows the similarities of these two worlds. … Through many anecdotes and interviews, the followers of this strange sect show us that they found an understanding environment, after having felt like outsiders or excluded from their communities, whether it’s a punk or a Jewish community.” —European Institute of Jewish Music