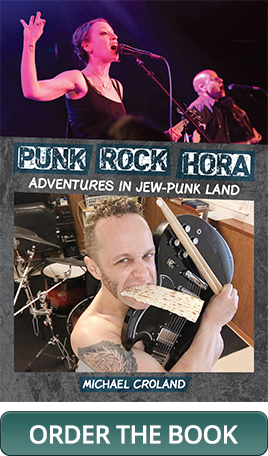 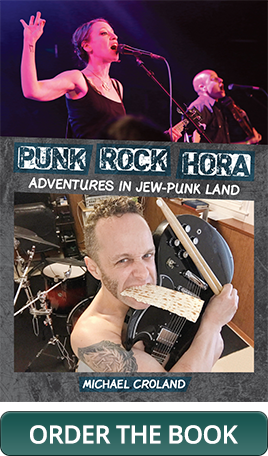 Since 2005, Michael Croland has schlepped far and wide covering Jewish punk bands. He has attended scores of concerts and interviewed dozens of musicians. He is the author of a scholarly book, Oy Oy Oy Gevalt! Jews and Punk (Praeger, 2016). He has written many articles for his blogs and as a freelance writer for the Forward, JTA, Jewcy.com, and more.

Michael has drunk Manischewitz wine passed around a pit, witnessed a bagel fight between a singer and concertgoers, and scheduled his wedding around a band’s availability. He has danced the hora with the intensity turned up to 11, inspiring the fun hora interludes between chapters.

Jewish punks are loudly and proudly Jewish in personally meaningful and outside-the-box ways. But Michael’s journey isn’t just about their art. By writing about Jewish punk, Michael created an identity for himself and learned how to be comfortable in his own skin.

The Jewish punks I’ve focused on are doing something significant: They are expressing their Jewishness in creative, against-the-grain, and personally meaningful ways. In a shifting Jewish landscape where some institutions struggle to stay afloat and individuals do what’s best for them, people who “do Jewish” in engaged ways with strong connections to their Jewishness should be recognized. They shouldn’t be dismissed because their music is abrasive or their lyrics are hard to understand when screamed.

—from the preface of Punk Rock Hora

“I bloody well loved Michael Croland’s Punk Rock Hora. A devotional symphony of words to the most obscure musical genre ever, written by its most fanatical listener. Awesome.” —Bram Presser, singer of Yidcore

“Michael Croland has a perspective on self-discovery and culture that seems definitively unique. … A fun read and gives clear insight into Croland’s energetic, youthful obsession as well as insight into a sometimes irreverent and always loud and diverse Jewpunk culture.” —Hevria

“Very informative and fun-to-read book. Michael Croland has been following Jewish punk bands since 2005 and has been to many, many concerts and has gotten to know and to interview many musicians. He is an authority on the subject and eagerly shares what he knows. … I really had a great time reading this book—in fact, I enjoyed it so much that I read it in one sitting and then began looking at webpages of the bands. Reading Croland was like sharing an afternoon with a friend who has many new things to tell me.” —Reviews by Amos Lassen

“Punk Rock Hora, which is Michael’s love song to this genre. … He’s passed the Manischewitz bottle around the mosh pit, he’s watched singer and audience have a bagel fight, he’s danced the hora with the volume cranked up. … One of the thrills of the book is seeing you get more and more involved in the subject. You’re certainly not a passive observer at all but, increasingly, an active participant in the Jewish punk scene. A real do-it-yourself spirit! … Punk Rock Hora’s a lovely book. It really is.” —Johnny Negotiable, KRNN Juneau

“It is very enjoyable! … I loved Oy Oy Oy Gevalt! Jews and Punk and it was great to re-meet bands from that book and find out about newer bands, sending me to the internet to hear their music and causing me to lament that my local record stores are lacking in a ‘Jewish Punk’ section. I hope the author continues to write about this particular scene, not least because his writing style is very engaging. But if he doesn’t, the two books he has provided us with are absolute treasures!” —Goodreads

“Talks about the musicians who combine punk rock and Judaism, be it at a cultural, identity, musical aspect, or the three at the same time. … Speaks of the Jew-punk phenomena.” —European Institute of Jewish Music 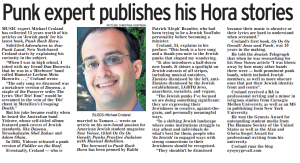 Click here for a full recap of media coverage.