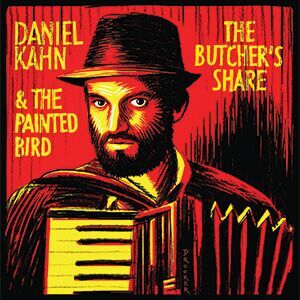 Daniel Kahn & The Painted Bird herald their new album as “klezmer-punk anthems for the revolution or the apocalypse,” with songs that “speak to the political moment as much as they address eternal struggles of class and liberation.” Kahn has often played with the past and the present, letting radicals and revolutionaries from yesteryear have a say through a contemporary lens. In the era of Trump, the alt-right, and Brexit, his approach isn’t a stretch. It’s timely. 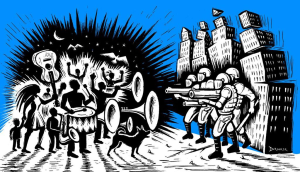 All artwork by Eric Drooker, from the liner notes for The Butcher’s Share

Following a short intro song, The Butcher’s Share kicks off with its boisterous title track. The lyrics discuss an ignorance-is-bliss approach to “the power people wield” and human rights, stressing the importance of “our needs” over “evil deeds.” In the last few lines, once the point has been become clear, Kahn snarls and shouts to vehemently deliver his message: People pay someone else to do the dirty work and look the other way.

The group made a video for the catchy “Freedom Is a Verb,” which posits that freedom is “something you must constantly” work for in order to have it. Upon introducing the song at a show in New York on the last night of Passover, Kahn talked about how the theme of freedom was timely. But the song doesn’t narrowly define freedom as liberation from a ruler’s enslavement. As in other songs on the album, the socialist Kahn has biting social commentary about the masses who have gotten the short end of the stick, which is all too timely year-round nowadays. Kahn sings:

But lower pay and higher rent’s another kind of violence:
The violence of silence and of greed
The violence of feeling your irrelevance revealing
Every way in which you never will be freed

“99%—Nayn-Un-Nayntsik” pits the 99% vs. the 1%. It’s an anthem in Yiddish and English for the era of Occupy Wall Street, Bernie Sanders, and beyond. Kahn sings, “Ninety-nine is a community, one percent is a fuck-you-nity.” 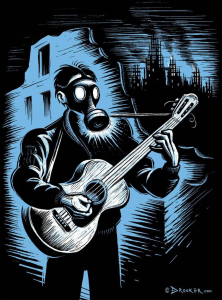 “Arbeter Froyen” is a prettier folk song about hard-working women. The electric guitar solo is a rockin’ interlude, but it’s not intense or reminiscent of punk.

Of course, this so-called “klezmer-punk” isn’t punk rock. Kahn’s longer label, “Radical Yiddish Punkfolk Cabaret,” is more fitting. Kahn has never been restricted by a singular vision in his art or his message. The Butcher’s Share features four songs that were written for a 2016 staging of Isaac Bashevis Singer’s Enemies, A Love Story and two Abraham-themed “bonus tracks.” There’s a song with lyrics by the late Adrienne Cooper and music by Frank London (The Klezmatics and Hasidic New Wave). The album includes guest vocalists Michael Alpert (Brave Old World), Sarah Gordon (Yiddish Princess), Sasha Lurje (Goyfriend), Lorin Sklamberg (The Klezmatics), and Psoy Korolenko (The Brothers Nazaroff). Those contributors give a feel for a wide range of what contemporary klezmer has to offer. The same could be said for the album. As timely as the social commentary songs are, there’s more to The Butcher’s Share.