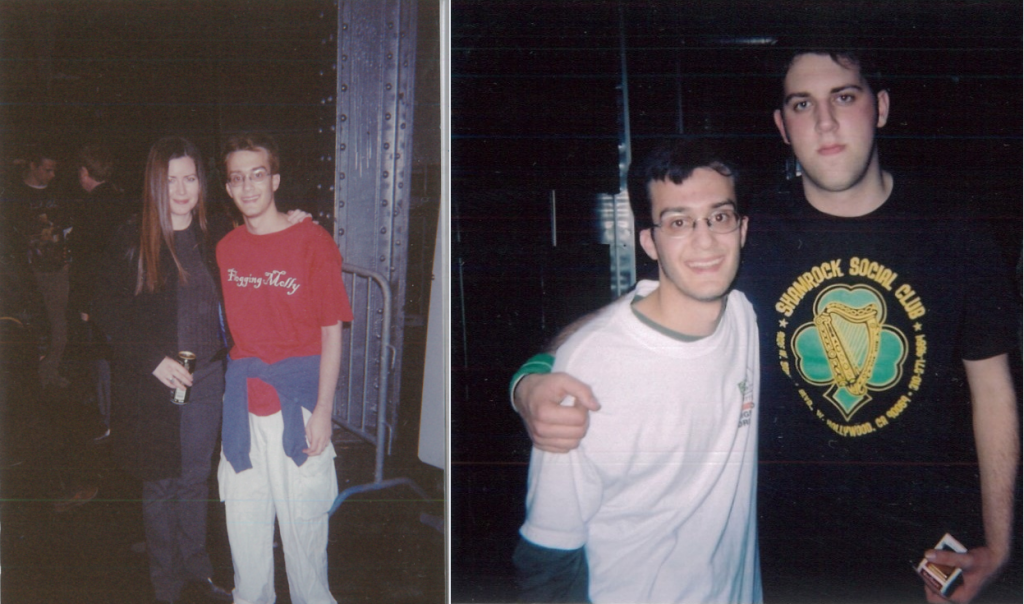 Left: Me with Bridget Regan of Flogging Molly, circa 2002. Right: Me with Tim Brennan of Dropkick Murphys, circa 2004. I was interviewing Celtic punk musicians and writing about them for my college newspaper over a decade ago, before I got into Jewish punk.

Yesterday I attended Shamrockfest (a huge St. Patrick’s Day music festival in Washington, DC) for the fourth time. Although I’ve seen the Celtic punk bands Flogging Molly and the Dropkick Murphys more than 20 times combined, it was my first time seeing them on the same bill! Celkilt, the Fighting Jamesons, the Gobshites, and Street Dogs were the other highlights yesterday. Through the years, I’ve also seen many other great Celtic punk/rock bands, including Barleyjuice, Black 47, Charm City Saints, Cutthroat Shamrock, Enter the Haggis, Flatfoot 56, the Mahones, the McCabes, the Mighty Regis, Off Kilter, the Prodigals, the Pubcrawlers, Ramshackle Army, the Skels, and the Tossers.

I got into both Flogging Molly and Dropkick Murphys around 2001. When I began going to Celtic punk shows, I loved the music and the cultural statement. The Irish kids at the shows had so much pride in their heritage, which seemingly made the concert experience even better for them because they could personally relate to the songs’ themes and cultural references. I wished that I could see a Jewish punk band rock out while simultaneously embracing my Jewish identity.

Within a few years, I did discover punk rock bands that put their Jewish identity front and center. In some senses, Jewishness in punk is analogous to how Irish punk groups incorporate traditional instruments, cover canonical songs from their respective traditions, and express ethnic and cultural pride.

Being such a big Celtic punk/rock fan gave me a good template to analyze Jewish punk bands. I already understood that there was a difference between punk rock bands that incorporated Irish musical elements or put their Irish identity front and center, like the Dropkick Murphys and Flatfoot 56, and bands that played Irish music through a punk filter, like the Pogues and the Tossers. Therefore, it made sense to me to put punk rock bands that put their Jewish identity front and center, like Yidcore and Moshiach Oi!, in a different chapter than bands that played klezmer in a punk way, like Golem and Daniel Kahn & The Painted Bird.

In blog posts going back to 2006, I’ve grappled with the connections between Jewish and Irish music and culture, and the music has encompassed traditional/folk varieties in addition to rock and punk rock. As I noted in a 2010 blog post, “Historically, the two immigrant groups were linked in songwriting as well as in other areas. Thematically, songs in both traditions display cultural pride and refer to the longing for a homeland by a people living in diaspora. Musically, Jewish and Irish folk music are often ‘exuberant’ … and both give the fiddle an “iconic status’ ….” At this point, for me, Celtic punk/rock is just fun for its own sake. I don’t particularly see my interest in Celtic music as an expression of or connection to my Jewishness.

Is There a Jewish Connection to Celtic Punk/Rock? (heebnvegan, 2006)

JewIrish: Enough of a Connection to Claim There Is One (heebnvegan, 2010)