My Chapter in New Book: Vegetarianism and Veganism among Jewish Punks 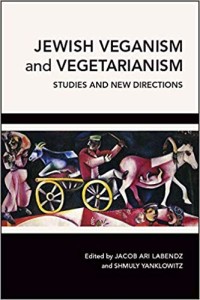 “Whether looking at the pages of the Talmud, vegetarian poems written in Yiddish, lyrics written by Jewish punk rockers, or into a pot of vegan matzo ball soup, this book explores the many ways in which Jews have questioned the ethics of eating animals.” —Jordan D. Rosenblum, author of The Jewish Dietary Laws in the Ancient World

SUNY Press will publish Jewish Veganism and Vegetarianism: Studies and New Directions, edited by Dr. Jacob Labendz and Rabbi Dr. Shmuly Yanklowitz, on April 1. I contributed a chapter titled “Vegetarianism and Veganism among Jewish Punks.” As Labendz said at the book launch today, I make my case with “fascinating examples and song lyrics and stories from concerts that are pretty wild.”

My chapter explores the popularity of vegetarianism/veganism among punks as well as shared values and backgrounds between Jews and punks. It discusses Jewish, vegetarian/vegan members of prominent punk rock bands, including the Ramones, The Clash, MDC, and Gogol Bordello. It delves into Jewish punk bands with vegetarian/vegan members, including the Shondes, Moshiach Oi!, Useless ID, Yidcore, and Steve “Gangsta Rabbi” Lieberman. It looks at examples from the food world, particularly Isa Chandra Moskowitz and PunkTorah’s NewKosher Cookbook: Your Favorite Jewish Vegan Recipes!

I figured that sharing songs and videos from some of the featured subjects would add another dimension to my chapter! Warning: Sometimes punk rock can be offensive.

Useless ID: Without a Choice

Useless ID, Israel’s leading punk band, discussed how “innocent creatures” have their young taken away from them and are slaughtered for food. “Stop animal abuse,” the lyrics declared. The song noted that while animals might not have a say in whether they are killed for food, people do have a say. In the song’s animated video, the members of Useless ID were trucked to a slaughterhouse. They were stunned by a rooster, decapitated by a chicken, and had their limbs cut off by a bull. After a cow made ground meat from one musician’s leg, a “Kosher” sign was visible.

Yidcore: Natalie Portman, This Is Your Last Chance

Yidcore front man Bram Presser tried to woo Natalie Portman, probably the world’s most famous Jewish vegan, in multiple songs. Here he addressed the extent of his crush as well as his compatibility with Portman, saying that the two were “meant to be.” He noted that both were “vego yiddin,” a creative way of saying vegetarian Jews. It was not an afterthought that he and Portman were both vegetarian and Jewish. He rattled off both factors at the top of his list of reasons why they should be together.

Gangsta Rabbi: Glad I Am a Vegetarian

This song was a vehicle for Steve “Gangsta Rabbi” Lieberman to talk about his vegetarianism with pride. He sang about how he would not eat a half-dozen different types of animals, and in three examples, he named anthropomorphized animals from popular movies to make his case. Lieberman explained the song by saying, “I did it for the right reasons, as a protest [against] the slaughter of the L-rd’s creatures for human consumption. Although permitted in the Torah (certain animals anyway), many references are there to show kindness and compassion to animals, thus my way of doing that: not eating them.”

In the Passover episode of the Post Punk Kitchen, Isa Chandra Moskowitz explained that she and cohost Terry Hope Romero would make their own matzo meal and that one could do so by placing matzo in a food processor. Alternatively, she advised, “If you have a punk rock band in your living room, just give it to them and they’ll crush it up for you.” As a punk rock band performed, the singer crushed the matzo. The band members played around with kitchen utensils, such as using a soup ladle as a drumstick. This episode was Moskowitz’s most overt integration of Jewishness, veganism, and punk.

Note: The hardcover edition is $90.00. The softcover and eBook editions will be available this fall for $29.95.