Gangsta Rabbi Battles Cancer, Wonders “Has the G-d of Israel written a scorching rocker for me to play in Heaven—but not until I get there?” 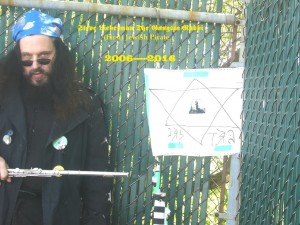 I interviewed Steve “Gangsta Rabbi” Lieberman for my very first article about Jewish punk in 2005. In 2006, he was the first Jewish punk artist I saw live; I also saw him perform in 2010 and 2011. I did an interview with him for my former blog, heebnvegan, in 2010. He’s the most prolific artist in my book; his 29th album (or, if you count the 38 prior cassette recordings, 67th) is forthcoming.

Even compared to other punk rock, the Gangsta Rabbi’s music is abrasive, outside-the-box, and not commercial. One of the high points in his career was when the Jewish record label JDub Records released one of his albums. He had some modest success with digital sales of his music. But by and large, by conventional standards, the self-professed King of Jewish Punk has not been successful or popular.

I’ve come to admire Steve. In Oy Oy Oy Gevalt! Jews and Punk, I talk about how Steve is a one-man band in music and in life, including having founded a sect of Judaism for which he is the only adherent. He does things his own way. He is widely misunderstood and unappreciated. He takes his Jewish practice and beliefs very seriously. He wears his heart on his sleeve. He has a persistent drive to express himself as an artist that is unlike any other musician I’ve ever encountered. Let this sink in: Despite not having a large audience or conventionally conceived success, this one-man band has created 67 albums.

Steve is battling bone marrow cancer. In 2013, after I found out I’d gotten a book deal but before my contract was signed, he was the first person I interviewed for my book. I didn’t want to risk missing the chance to do a proper in-person interview with him.

On multiple occasions, you’ve said that you were playing your last show and releasing your last album, only to come back for more. What inspires you to keep going?

In 2011, for the “My Last Rock Show” tour, it was a good time for me to go. I barely got any reviews for the companion CD, My Magic Last Days (2012), and needed one [more] big tour to finish it up. The day after I opened for the Misfits, I went on my 1st round of chemotherapy. It didn’t work and I started downward in 2013. I signed in at Memorial Sloan-Kettering, and they determined I had progressed to early myelofibrosis. I went on my 2nd round [of chemotherapy]. I went every week for 6 months during 2013–2014, most of the time too sick to record.

I needed to tell this story, and by the end of 2014, I released Cancer Ward. During the recording of Cancer Ward, I was hospitalized 11 times and received 36 pints of transfused blood. As 2015 came, the disease progression slowed down and I became extremely prolific on the musical side, releasing the 4-part, 77-song monster, Return of the Jewish Pirate #1-4. And then the partially original Blast-O-Rama and Terminator V617F… then the Dementia Series…

You just put out the song “Where the Hell’s My Nurse?” (from your forthcoming album Down with a Bang #29), and in recent years, you’ve released albums titled Cancer Ward and My Magic Last Days. Do you find that making music about your struggles with cancer is cathartic?

For me, the cancer is not a crisis. I feel I’ve been again chosen by G-d, this time to let me know that my time will be limited and there are great things to follow. He, in dreams, brings me to places where my parents (both deceased) and my puppies (Buttons, Midnite, and Mori) are. It could be at a breezy afternoon baseball game, an amusement park, a ghetto I lived in—it’s all wonderful.

But the most wonderful one happened on 5/11/2016. I was going into severe leukemic crisis for days by then. At the hospital that night, my HgB [hemoglobin] was 3.6 (normal is between 13 and 16). My cancer doctors told me under 4.0 is pretty certain death. I lay down, and I feel a hand closing my eyes. Then I suddenly appear on a pristine, white stage—playing every instrument I ever knew, all at the same time, but not as a freak, as a slight built older man with really good hair! I’m up there playing alone. The crowd is very noisy, but their faces are all hidden. Then I feel the same hand opening up my eyes. Awake, I stumbled to my recording board and tried to record what I just did. In one minute, it was gone from my memory. Has the G-d of Israel written a scorching rocker for me to play in Heaven—but not until I get there?

I use the lyrics of these albums, from My Magic Last Days to Down with a Bang #29, to proclaim the miracles I get blessed with each day. And I provide detailed references to each stage of suffering so no one forgets me too soon.

The new one, “Where the Hell’s My Nurse?,” is a protest song against the sponsor of my chemo-therapy trial. I was pretty much told it won’t help me, nothing works, but maybe I may give hope to others. …  I plan to leave this study soon and suspend any and all treatment of myeloproliferative leukemia.

You’ve always drawn on many musical styles. Earlier this year, you released albums covering The Who’s Quadrophenia and Tommy and Jethro Tull’s Aqualung. Were your Jewish and punk approaches part of the mix even in these projects?

This trilogy was of course Jewish punk records because it was me who did it. I wrote the official Jewish Punk riff in 2003, and it appears a lot in my records. I’m doing a 2-octave D-harmonic scale, tremolo picking the bass with my left index [finger] through distorted power chords. It is best represented at the end of the “Bombshelter” medley on Jewish Riot Oy! Oy! Oy! Since neither Pete Townshend [of The Who] nor Ian Anderson [of Jethro Tull] favored this riff, I used their chords and melodies as I had to.

In the years to come, what do you want people to remember about The Gangsta Rabbi?

That my career was totally successful, although in 15 years I have but 120,000 sales, for revenue of less than $5,000.00. I was a greater than minimum footnote in the history of rock, thanks to bipolar disorder, leukemia, and great journalists such as Michael Croland and the like. Your book is fantastic.