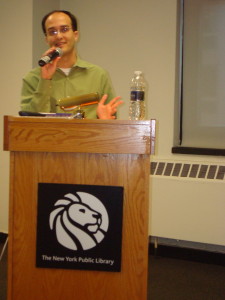 I had a terrific event for Oy Oy Oy Gevalt! Jews and Punk at the New York Public Library Mid-Manhattan Library last night. I assigned the task of counting to a friend who has a master’s degree in math, and he said that, including me, 54 people were present.

Much of the multimedia Powerpoint presentation was similar to the one I gave at my book release party in June. At both events, I discussed several categories of bands from Chapter 3: Jewish punk bands that put humor front and center (Yidcore, Jewdriver, the Groggers, and Schmekel), overtly religious Jewish punk bands (Moshiach Oi!), and Jewish punk bands that integrate traditional Jewish music (KOSHER, Di Nigunim, and the Shondes). This time around, I added several artists from Chapter 4 that took a punk approach to various types of traditional Jewish music (Golem, Daniel Kahn & The Painted Bird, and Electric Simcha), since they dovetailed so nicely with the latter category of Chapter 3 bands. I was glad to the point out that some of the key bands in the book have shows coming up in New York in the next month, including Moshiach Oi!, the Shondes, and Golem. (Click the links for more information.) There were some great questions from the audience during the Q&A.

I was thrilled to have several people from the book in attendance, so of course we had to take a group photo! Their names and bands/projects are in the caption. All photos are by Dan Rauchwerk. 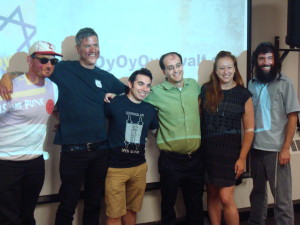 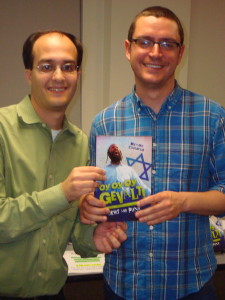 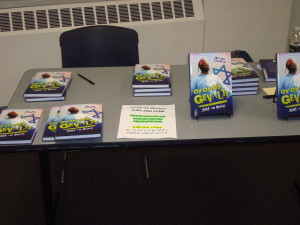