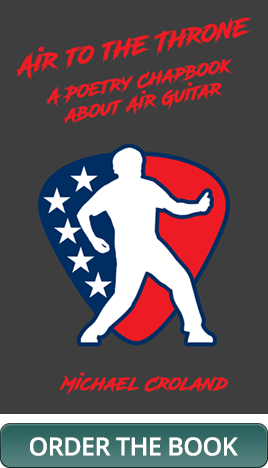 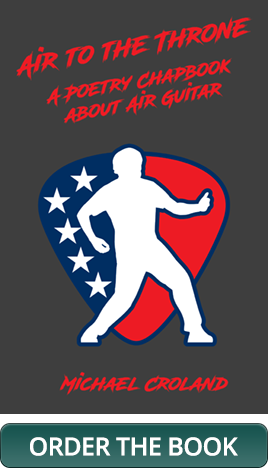 Air to the Throne: A Poetry Chapbook about Air Guitar

“In all fairness—
These poems ooze with airness.”
—Dan “Björn Türoque” Crane, author of To Air Is Human

“If air guitar had a poet laureate, it would be Michael Croland.”
—Eric Jonas, PhD, original recipient of the poems

Over the past decade, Airistotle has dominated air guitar competitions and dazzled audiences. The two-time world champion and four-time US champion deserves poems glorifying his greatness!

Air to the Throne recaps Airistotle’s triumphs and captures the essence of a silly sport and its larger-than-life characters. The poems address new directions and alternative perspectives for air guitar and other invisible instruments. More than a chronicle of competitions, this poetry chapbook speaks to overzealous nationalism and the prioritization of winning during the Trump era—all with humor, wordplay, and ambitious rhymes.

Michael Croland is the author of Oy Oy Oy Gevalt! Jews and Punk and Punk Rock Hora: Adventures in Jew-Punk Land. As an air guitar artist and expert, Michael has appeared or been cited in To Air Is Human, Sports Illustrated TV, CBS New York, The Virginian-Pilot, Houston Press, The Medical Journal of Australia, and Teruah Jewish Music.

“I found each poem to be enlightening and fun to read. . . . We become very aware of Croland’s cleverness in looking at important issues in the guise of air guitar. . . . I was immediately pulled in with the first poem and was not able to let go.” —Reviews by Amos Lassen

Here is a video of Michael reciting “The Oprah Effect”:

Here is a video of Michael reading “Americans Watching the AGWC Livestream When They Had Other Responsibilities”:

Click here to read “Air to the Throne: A Guide for Fans of My Jewish Punk Books.”

Click here to read “Finding the Jewishness in Air Guitar Poetry” on Hevria.com.

I. The Airistotle Dynasty
The Everyman’s Rock Star
USAG Champion for the Second Time
Eyre Apparent
The Americans Were Looking Good
The Airistotle Dynasty
Air Travel
Darn Tootin’!
Will Airistotle Pull It Off?
Heir to the Throne
Ere the Dark Horse Competition and AGWC
I Believed
The Champ for Air Fore’er and E’er
Airistotle Didn’t Err, but . . .
Heavy Meta
Perfect Score: Airistotle’s First New York Regional since 2014
End of an AIRa?

II. Air Guitar: Beyond Airistotle
Call Me Aseleponeuvottelutoimikunnansihteeristö (Finnish for “The Secretariat to the Peace Negotiations Committee”)
Americans Watching the AGWC Livestream When They Had Other Responsibilities
The Oprah Effect
The Wind Retrieves His Brother