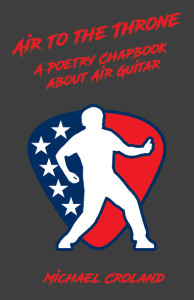 In Air to the Throne: A Poetry Chapbook about Air Guitar, I included poems I’ve written about air guitar since 2014. I considered including my limericks but didn’t.

Here for the first time are seven limericks about air guitar—plus one about air accordion! There’s even a brand-new limerick about Smiley Rod, who won the US Air Guitar Online Championships this weekend.

Focus on today? Ev’ry reason
Otherwise, air guitar fan treason
But then season’s dead
I can’t help but dread
The nigh ennui of the offseason

There once was a man named Björn Türoque
Playing the air guitar, he did rock
But now he emcees
The airemonies
When somebody is bad, he will mock

There once was a Brown dissertation
For the best topic in the nation
In case you’ve not heard
It’s McDaniel, Byrd,
Who will bring us all such elation!

There once was an airtiste who’s all that
Poor judging made her chances go splat
May she try ag’in!
This time she shall win!
My pick for the new champ is KitKat

Root for Royalty, Not Rookies
2019

There once was a king, Airistotle
Not some new champ we’d have to coddle
To air royalty
We pledge loyalty
He’s sure to perform at full throttle

The 7th American to Win the Air Guitar World Championships
2019

There once was a champ: U S A G
Who then won the A G Dubya C
Though not my first choice
I still will rejoice
The gold medal went to The Marquis

Online Championships during a Pandemic
2020

The season’s cancellation brought rage
Back in the bedroom? Rat in a cage!
Videos? They’re odd
But then Smiley Rod
Won by performing on a real stage!