Jewish Highlights of Bad Religion’s New Book, Plus Some Disappointments 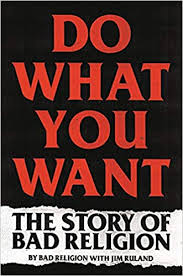 I spoke extensively about Bad Religion in my 2016 book Oy Oy Oy Gevalt! Jews and Punk. I worked hard to give a complete picture considering that Brett Gurewitz—their guitarist, cofounder, and cosongwriter—had “not spoken of his Jewish background frequently” and “declined to be interviewed for this book through a publicist.”

I looked forward to Bad Religion’s brand-new authorized biography, Do What You Want, as a fan, and I read it with a careful eye as to what I might have framed differently if I’d had access to a Bad Religion book while researching and writing my own. I learned new details that would have affected what I wrote, and there were some letdowns along the way.

Yes, Gurewitz’s Jewish identity played a role! Gurewitz didn’t design the logo merely as a Jew speaking out against Christianity. Rather, as some punks embraced the swastika as a shocking symbol, he did not feel comfortable doing so. He created the crossbuster as a shocking symbol instead. Here’s an excerpt from Do What You Want:

When Brett fleshed the logo out, he intentionally used red, white, and black, colors associated with the swastika, the symbol of the Nazi party. “It wasn’t uncommon to see people wearing swastikas in the early punk scene,” Brett said. “I thought kids were probably wearing it for shock value, but I wasn’t comfortable with that, and I could never wear one. The red, white, and black crossbuster is a strong, striking icon. As a young, Jewish kid, it was something I could wear that was equally shocking as a swastika.”

It was imprecise to suggest that agnosticism and Gurewitz’s “provisional deist” beliefs were mutually exclusive. Gurewitz said:

I would say that I was agnostic at a very, very young age, even though I had some religious training from my parents, which was really just for traditional purposes so I could have my bar mitzvah. I found myself to be profoundly skeptical of it. I came out of that not as an atheist, because I was always very interested in philosophy, but as an agnostic and possibly a pantheist. . . . I was into Western philosophy and the philosophy of the East and was skeptical of the religious training I was exposed to.

I was aware that Gurewitz sometimes went by “Mr. Brett,” but I never thought much of it. Gurewitz explained that he used the nickname in part to hide his Jewishness.

I felt like there was some anti-Semitism in the scene and it made me reluctant to use my Jewish-sounding last name. . . . When homophobia and racism crept into the hardcore scene, it felt sinister. To be honest, I didn’t feel particularly safe. That’s why I started going by Mr. Brett on our records and the nickname stuck.

While researching Oy Oy Oy Gevalt!, I listened to all of Bad Religion’s albums up until that point, except Into the Unknown, for which I read the lyrics online. Do What You Want estimates that their catalog—including one album released since 2016—adds up to about 400 songs. I missed the Jewish reference in 2004’s “Beyond Electric Dreams,” in which Gurewitz referred to the Sierra Nevada Mountains as a “red-spattered synagogue of granite.” In Do What You Want, Gurewitz said “church” instead of “synagogue”:

“Beyond Electric Dreams” is about the Sierra Nevada Mountains, a place that Brett has felt connected to since he hiked 190 miles of the John Muir Trail when he was a teenager. “The mountains are my church,” Brett said. “They’re my place to escape cultural conventions and recharge spiritually.”

I didn’t learn anything new about the meaning behind “Sorrow,” but I appreciate that the song was discussed in greater depth than any other in Do What You Want. Gurewitz explained:

Who could worship such a despicable god? A god that would take his one loyal creation and sell him out to evil? Why wouldn’t G-d protect Job? Why wouldn’t he say, “F*** off, Devil! Keep your hands off Job! He’s a good dude!” But G-d didn’t do that. The despair in the story of Job is that the creator of the universe turned his back on man.

A twenty-eight-year band member got short shrift, but nothing in Do What You Want suggested I should have dug deeper in terms of how his Jewishness might have affected anything significant in Bad Religion. Disappointingly, Hetson’s voice is missing. A footnote explains, “Although Greg Hetson was contacted numerous times, he declined to be interviewed for this book.”

Those explanations added context, so that any lyrics that might seem offensive “should not be dismissed out of hand.” I went even further in giving the band credit as part of a terrific discussion on a Christian punk podcast last year.

Such depth and nuance were lacking in Do What You Want. While the book was ostensibly by Bad Religion with Jim Ruland, it was written by Ruland based on the band’s input. Ruland wrote that the group’s “very existence was an affront to Christianity.” He said that their “overwhelmingly negative view of Christianity” was “blatantly offensive.” If you read the well considered reflections from Gurewitz and Graffin in Oy Oy Oy Gevalt!, you’ll realize that Ruland sold the band short. The official Bad Religion book is a missed opportunity to critically examine blind faith and overreliance on organized religion in a manner deserving of the band’s forty-year career.

Several band members have tried to explain through the years how their songs and outlook should not be deemed offensive. That nuanced take is largely missing in Do What You Want.

Quite fascinatingly, Graffin singles out 1990’s “God Song” as “the one instance where he felt he went too far.” Do What You Want explains:

It’s not that Greg didn’t believe in the truth behind the lyric; rather he recognized that the song’s power to effect change was diminished by reducing religion to something small and insignificant. No one wins arguments by being dismissive and didactic.

It’s baffling that Graffin could reach this conclusion about “God Song” but not “Faith in God.”