Punk Rock and the Book of Job at Artists’ Beit Midrash

There’s an artists’ beit midrash (study hall) about the Book of Job at Town & Village Synagogue in Manhattan, led by rabbinic intern Bronwen Mullin. Students study Job, discuss art based on Job, and then create their own Job-related art. I was a guest lecturer for several sessions this month, focusing on punk rock songs about Job by two artists featured in Oy Oy Oy Gevalt! Jews and Punk: Steve “Gangsta Rabbi” Lieberman and Bad Religion. 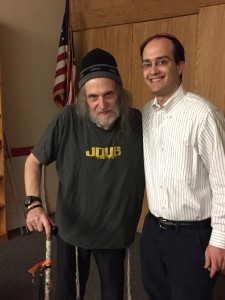 On March 1, the Gangsta Rabbi came in to perform his song “Job 29.15.” Click here to view the video, and click “Show More” below the video to read the lyrics. Lieberman has been battling leukemia and was in a medically induced coma for much of January. That made it all the more special not just to have him there but to see him playing fast and even smashing his bass against his amp.

Lieberman wrote the song when he was having a hard time at work and in life. “Although nothing compared to what Job physically went through, I was going through the ringer. And it was like my own personal Jobdom,” Lieberman said. “It’s a good time to tell his story because I can tell it almost firsthand.” When he spoke about Job having boils, he related to boils as a metaphor for how his boss was treating him. Although Steve wrote the song two decades ago, he rewrote some of the lyrics for the beit midrash to more accurately reflect some of the nitty-gritty details in Job’s story, such as the number of children Job had.

My favorite verse is: “I have 3 crazy buddies/ From the Canaanites/ They think that I’m a sinner/ But I always do what’s right.” Steve explained, “I thought they’re crazy because they, even ‘til the end, did not listen. … They knew Job was not a sinner. They knew him too well to believe that suddenly he’s deserving all these things. So they are crazy in how they judge a real servant of the Lord …. So they know he’s blameless, these buddies, and yet they were blaming him.” 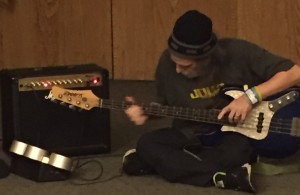 Bad Religion guitarist Brett Gurewitz, who is Jewish, wrote “Sorrow” for Bad Religion’s 2002 album, The Process of Belief, and he’s called it his “best” song. The song’s narrator asks whether “Father” (G-d) can hear him and how he let Him down, curses the day he was born (based on Job 3:1-3), and refers to a bet “between a prideful father and his son” (G-d and Satan). We read fascinating perspectives on the song from a Bad Religion fan site from users named Samantha and Hecademus.

Gurewitz asked himself, “What’s the saddest thing I could possibly think of?” He wrote “Sorrow” based on Job, calling Job the “archetypal sad story” and “the saddest story ever told.” Some students in the artists’ beit midrash disagreed with that characterization. Varying responses noted that Job was more about frustration and anger, that the story has a happy ending, and that it’s hard to feel sad for Job because he’s difficult to relate to.

At the core of the lyrics is the question of theodicy. Students didn’t agree with Gurewitz’s conclusion that “it’s impossible to justify the suffering in the world with the existence of a G-d.” They also rejected the notion (common in Bad Religion songs) that religion is about blind faith, saying it’s antithetical to the questioning in Judaism.

The song lyrics go beyond Job’s story to decry “all the sorrow in this world.” We discussed how the song’s references to universal sorrow went beyond Job’s sorrow, which was what Job focused on. Some students said that one couldn’t help but read bigger things in Job’s story and that the utopian vision of a world without sorrow was the answer to the question posed by the Book of Job. 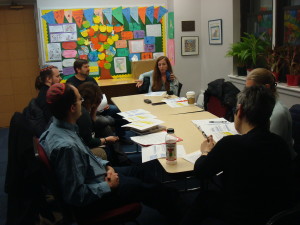