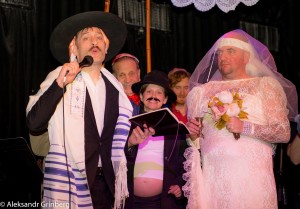 On March 23, Golem, a klezmer-rock band with a punk edge, staged a fake wedding. It was an opportunity for Golem to perform a wide variety of songs and styles that they play at weddings but not their concerts. Golem also adapted a Jewish tradition of fake weddings from the Catskills.

I was actually reading a book about the Jewish hotels in the Catskill Mountains that were flourishing the ’50s and ’60s. So that was where many Jews from New York City would go spend the summer. I had no idea about this, but a lot of the hotels on Labor Day weekend at the end of the summer would put on a mock wedding with the bride and groom in drag and a fake rabbi. And everything was really fun and funny, a lot of drinking, and it was kind of a way to bring the summer to an end. And I thought, well, we need to do like a 21st-century version of this. . . .

I do want people to learn something about the Jewish wedding traditions because I think they’re really beautiful, and a lot of people, including a lot of Jews, don’t know that much about them.

While there was plenty of performance art thrown in, the foundation of the event was actual wedding traditions.

The fake wedding was genuinely a blast. Golem’s other singer, Aaron Diskin, was hilarious in his role as rabbi. He explained that the four sides of the chuppah were the right side, the dark side, the wrong side, and New Jersey. The groom was pregnant. The bride was a a burly, bald man who gripped my arm tightly when I refused to take a slice of cake. The long hora was a highlight, featuring violin and guitar solos. Golem mixed their klezmer numbers, like “Meat Street” and “Tum Balalaika,” with covers that fans don’t get to hear at their concerts, like “Shake, Rattle, and Roll” and “Girls Just Want to Have Fun.” 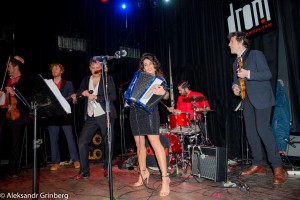 When Golem started playing the hora, nobody was dancing in a circle quite yet. Kogan made a motion with her fingers for people to go around in a circle, identical to the one that rock singers do when they want concertgoers to start a circle pit. As a veteran of at least 21 Golem shows, I started a hora and it wasn’t my first time doing so. Shortly afterward I hoisted up the groom in a chair, and it reminded me of holding someone up for crowd-surfing. The contexts of a simcha hora and moshing/crowd-surfing may be different. But the live, in-the-moment energy in the crowd, in response to the energy exuded by the band onstage, is there for both. 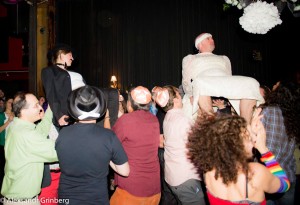 I’m in the green shirt, lifting up the pregnant groom.