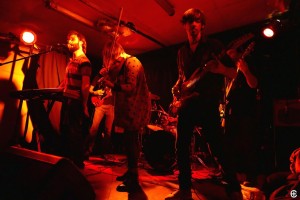 I was happy to hear from Jean-Gabriel Davis a few months ago. Davis is the lead singer and pianist of a band called Klunk (short for “klezmer-punk”) in Paris. He also works at the European Institute of Jewish Music, and I was grateful for his nice review of Oy Oy Oy Gevalt! Jews and Punk.

The EP’s best klezmer-punk song is “Daloy Polizey.” The title/refrain translates to “Down with the Police.” According to the Jewish Music Research Centre, the song dates back to at least 1905 and “the chorus was shouted rather than sung.” The Centre explained, “The text of the song tends toward anarchism, even anarchist terror, especially in the verse that calls to bury Tsar Nicolai along with his mother. These verses may be connected to more radical sections of the Labor Bund or to smaller groups of Jewish anarchists.” Klunk’s “Daloy Polizey” features raspy vocals, with shouting at times, in addition to crunchy guitar chords and a fast tempo.

Klunk mines Yiddish music of yesteryear for radical/socialist/anarchist songs, reminiscent of Daniel Kahn & The Painted Bird. Klunk’s music is definitely heavier than Kahn’s. I recognized one Klunk song, “Arbetlozer Marsh,” from Kahn’s version. Whereas Kahn added English lyrics to the Yiddish, Klunk added French, so that their audience would understand.

Here is my interview with Jean-Gabriel Davis of Klunk.

In “Daloy Polizey,” I hear Klunk taking a klezmer-punk approach. In “Sha Still” (with the slower tempo and especially the guitar solo in the bridge) and “Yiddish Honga” (especially the metal/metalcore breakdown), I hear a klezmer-metal approach.

I feel they are different approaches. Bénédicte [violinist] and I are punk music fans. Julian [guitarist] and Roman [bassist] are metal fans. So we play both styles. Depending on the song, the story, and the arrangement, it may be more punk, more metal, or a subtle blend of the two. What links everything is the Yiddish language, the violin, the electric guitars, and the drums.

In “Daloy Polizey,” “Barikadn,” and “Arbetlozer Marsh,” you’re playing old, radical, traditional Yiddish songs. Do you identify as a socialist, communist, anarchist, etc.? Do you find punk messages in Jewish tradition from yesteryear?

We identify as very close to the left-wing political ideas. We don’t bear a specific label. We believe in peace for everybody, equality, justice, love . . . and we are angry about how the world is turning now. All this anger and hope for a better world were already there in the old Yiddish songs (“Daloy Polizey” and “Barikadn” against oppressors, “Arbetlozer Marsh” against poverty, unemployment, and inequality).

Why do klezmer and punk fit together?

They have the same energy basically (concerning the fast-tempo klezmer songs). Klezmer and punk are festive in a way. They make you want to dance, jump, smile, laugh, and drink beer! I loved the 2 styles of music, and I strongly desired to play in a klezmer-punk band.

In “Arbetlozer Marsh,” you had some lyrics in French. Were you trying to make it relatable for your audience at shows in France?

Yes. That’s kind of a dilemma: We want to sing in Yiddish, to make Yiddish sound, but most of the people won’t understand what we sing, although the songs tell messages we agree with, such as peace, tolerance, and equality.

We incorporate French lyrics, translated from Yiddish, in order for people to understand a little bit. It’s true that in many punk or metal bands, even when they sing in English, we don’t understand anything. So it’s not that important—we explain a little the meaning or context of the songs during a live show. Most important is the energy.

It’s a difficult time to be Jewish in France. Is there a statement that you’re making by playing such overtly Jewish music in Paris today?

We do not claim to be a Jewish band. Yiddish is a language, and klezmer is a musical tradition. Klunk plays traditional folkloric songs with social themes, of a people who were oppressed, poor, and almost completely killed: Eastern and Central European Jews at the beginning of the 20th century.

Personally, I am not at all religious. And when I discovered the Yiddish world, I found a history of a culture of a people, not necessarily religious, but still Jewish. That was very strong for me as nobody told me about that, and I personally found myself. So it’s the Jewish culture that we claim and not the Jewish religion.

Klunk says FUCK all oppressors, dictators, and mean people. Institutionalized religion, politicized religion, is a kind of oppression as strong and fatal as other ideologies. Punk is anti-religious in its essence.