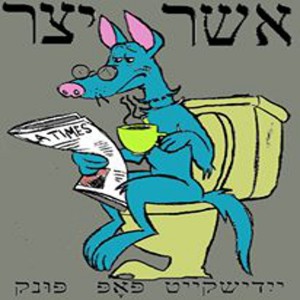 There’s a new Jewish punk band, and it’s a Yiddish pop-punk band! Asher Yatzar formed last year and got its name from the prayer said after excretion. The Chicago band played its first show in March. Click here to watch a video from an Asher Yatzar show.

In the below interview, drummer/singer Dave and guitarist/singer Shmul discuss how singing in Yiddish isn’t so radical, how Asher Yatzar’s debut show got bogged down by Israel-bashing, and how Jews can exercise their body, mind, and soul for optimal health. Asher Yatzar is using punk rock to cleverly, thoroughly, and meaningfully delve into Jewish topics and make art based on their Jewishness. That Asher Yatzer is doing so in Yiddish is even more impressive.

Why did you think that Yiddish and pop-punk would make a good fit?

D: We didn’t think that Yiddish would be a good fit for pop-punk, rather that Yiddish fit us … perfectly. We started the band with the intent and goal to sing entirely in Yiddish.

Is there something rebellious/punk about keeping Yiddish alive with a new direction for Yiddish art?

S: I think it’s actually a fairly conservative move. A lot of people get drawn to Yiddish because of its association with Jewish radical politics (and that’s definitely a history I want to celebrate in our music), but I think the actual act of trying to preserve Yiddish through pop culture isn’t inherently rebellious or anything. Maybe it could be interpreted as a kind of a challenge to Modern Hebrew? Or a rebellion against assimilation? That’s a secondary concern for me. Reconnecting with my Mame-Loshen (mother tongue) and helping to preserve my cultural heritage is my primary goal with this band, and I think that’s a fairly conservative thing to do.

D: I prefer to see it as quite natural for an Ashkenazi Jew to sing/speak Yiddish, more than put it some place on any kind of conservative to rebellious spectrum. I don’t like putting Yiddish in some radical or out there place. … We’re not rebelling against Judaism, which may be the (incorrect) assumption since we’re using punk as our vehicle, which often expresses itself as anti–whatever-your-parents-are. We miss our parents and grandparents!

People sometimes have trouble understanding punk lyrics when they’re sung. Many Jews (and certainly non-Jews) don’t know more than a little Yiddish. Do these factors combine to make it particularly unlikely that audiences will understand what your lyrics are about?

D: Our album will come with complete lyrics and transliteration, as well as extensive Rashi commentary. One finger on the lyrics and the other on the Rashi. All kidding aside, like most non-English bands that sing and put out music, we’ll include some transliteration and translation. Our music is for Jews. … We have our anthem song which has the chorus “Dos lid is far di yid’n” (“This song is for the Jews”).

S: We played as well as any band could have with only a few practices behind us and maybe four or five songs. … However, at the end of our set, somebody shouted “f*ck Israel.” It was some rando, and pretty much everyone I talked to about it thought it was f*cked up. Honestly, it threw us all off a little bit, and Dave and I were both really pissed afterwards. Otherwise it was a fun show!

D: Garden-variety unchecked armchair anti-Semitism from the left isn’t new. … All of our shows since then have been great. We’re getting bouncy.

What’s the song “Genitungen” (Exercise) about?

D: The song starts off with “obi … far i’deayl gezuntenkeit … genitungen” (“For optimal health… exercise”). Which we mean to say that you need to work your guf (body) and your brain and your nshoma (soul) for ideal health. There are endless ways to work out, and in the song, we sing briefly “running … biking.” And to exercise your brain, a Jew can study in a bet-midrash (house of study) and learn how to learn. And finally, and most often, a Jew exercises their own nshoma through davening, however they do it. Like we said, for optimal health. We’re presented every day with countless opportunities for mitzvot (commandments/good deeds), chesed (lovingkindness), appreciating things through brucha (blessings), etc.

Are there other Jewish-themed songs (besides just the Yiddish language)?

S: They’re all Jewish songs. My lyrics are generally more secular, but we have a song about the bund, a song about creating new paradigms for envisioning collective Jewish liberation, a song about Yiddishkayt. I think all of our songs are pretty much going to be about Judaism, Jewish politics, or Yiddishkayt.

Most punk rock bands that integrate their Jewish identity do so as “cultural Jews” more so than as “religious Jews.” Where does Asher Yatzar fit in?

S: For me, Yiddish is a way to kind of ground secular Jewish culture. I think a big question facing contemporary secular Jews is “what makes us Jewish?” Is it our relationship to a collective history? Our shared religion? Shared language? Something else? Yiddish at least is a good groundwork for a distinctly Jewish secular culture. I think we have songs which address “secular” issues as well as religious ones. One foot in the secular world, one in Torah (not literally of course).

D: For me, I can’t separate the two. I don’t feel I could have one without the other. Sometimes it feels like I dangle off HaShem with my fingertips.

What are the band’s plans going forward?

D: Recording a tape, playing as tight as possible, doing a summer tour, doing an episode of YidLife Crisis, having lunch with Mayim Bialik.

Do you think there’s a big audience for Yiddish pop-punk?

D: When you play such a narrow niche (I don’t mind the term niche) as Yiddish pop-punk, it’s not like there’re dozens of other bands clamoring for the same attention. Though I feel in some ways, the lyrics will go over the uncovered heads, I want the content to be so explicitly and unapologetically Ashkenazi Jewish, it makes a Jew feel proud.