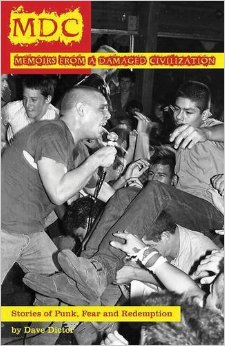 I was eager to read MDC: Memoir From a Damaged Civilization by MDC singer Dave Dictor, which came out last week. I knew MDC’s song “The Jew That Got Away,” but I wasn’t sure if Dictor was Jewish or wrote the song. The chorus declared, “Now I’m Max’s grandson, and I’m back to say, here I am, the living proof of the Jew that got away.” The lyrics ended with “And a shalom to you, motherf*cker!”

Dictor addressed the extent to which he came from a Jewish background early in the book:

I was only two when my mom divorced my blood father, Teddy, who subsequently moved to Florida, rarely to be heard from or seen thereafter. He was Jewish; my mom was Catholic. Intermarriage was not common or accepted in the 1940s or ’50s. The Jewish branch of my family never really accepted us; and the Italian Catholic branch looked at me with a jaundiced eye. This feeling of being an outsider from an early age, though I did not really understand it at the time, also deepened my sensitivity of how it feels to not fit in.

Despite saying he had little contact with his father and not saying much about his father’s side of the family, Dictor confirmed that “The Jew That Got Away” was indeed based on a true story. Dictor explained that it was “a song about my grandfather, Max Dictor, who got out of Germany before WWI and moved to Chicago.” He added, “When we played the conservative parts of Bavaria, it was real different than Berlin or Hamburg, people would look at us, with our funny haircuts and all, and we’d get up on stage and play it to let them know we were aware of their history.”

“The Jew That Got Away” talked about the Holocaust in an empowering way, and it stood up to fascists in present-day Germany. Not every Holocaust reference by MDC had as much tact. MDC’s drummer, Al Schultz, went by the stage name Alschvitz, an apparent pun on “Auschwitz.” Perhaps the best known MDC song was “John Wayne Was a Nazi,” which liberally used the term “Nazi” to decry John Wayne. The opening lyrics were “He liked to play SS / Kept a picture of Adolph.” As should be clear from reading Dictor’s accounts in the book of how he objected to audience members’ seig-heiling at concerts, MDC did not tolerate open support for Nazis. These examples should not be seen in a vacuum. As discussed in Oy Oy Oy Gevalt! Jews and Punk, questionable Holocaust references were not rare in punk.