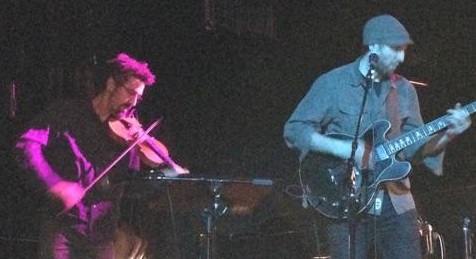 On Monday, I attended the Yiddish New York (YNY) Klezmer Blowout concert, part of the week-long YNY festival. One of the highlights was Frank London’s Klezmer Brass Allstars (with Frank London of the Klezmatics and Hasidic New Wave on trumpet, David Licht of the Klezmatics on drums, and Dan Blacksberg of Electric Simcha on trombone). The group featured guest appearances by numerous YNY faculty/participants, including Kahn. Pitom (with Yoshie Fruchter on guitar and Jeremy Brown, who also plays in Golem, on violin) closed out the night with a rockin’ set of its own unique brand of Jewish music, without particularly drawing on klezmer. 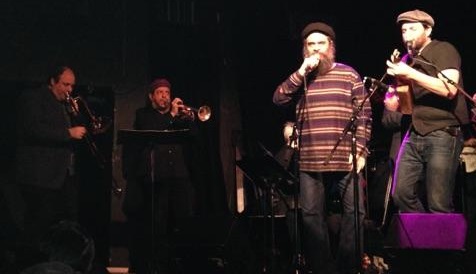 Musicians from all the key Chapter 4 bands participated in the signature YNY concert. Punk rock wasn’t tangibly part of the mix. But it had played a role in shaping the music of some of the key artists playing at a prominent showcase of leading klezmer—and other Jewish music—artists. (What role did punk play? Read Chapter 4!)

The YNY concert was a special place to be. Many audience members cheered, sang along to Yiddish standards, and danced—with horas and otherwise. I’ve attended some notable Jewish concerts in the last decade, but with so many YNY festivalgoers present, this was the first time where I really felt transported to another world. It was like a parallel universe where klezmer and Yiddish culture were appreciated—and rocked out to—by engaged fans in such a resounding way.

Then again, I shouldn’t be surprised. I saw some of these same artists—plus Golem and the Klezmatics—perform as part of Kulturfest (another week-long Yiddish/Jewish cultural festival in NYC) in June. I saw a Yiddish production of Death of a Salesman (featuring Kahn) in November. Seth Rogovoy just wrote a great article for the Forward titled “Why 2015 Was the Most Yiddish Year of All.” Pointing to these examples and more, Rogovoy wrote that “we’re in the midst of a rich and creative revival such that the language and its culture hasn’t seen in decades.”