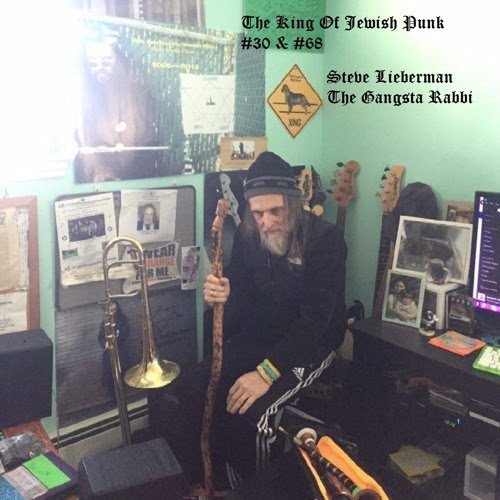 In January (while he was in a medically induced coma, no less), the unstoppable Steve “Gangsta Rabbi” Lieberman released The King of Jewish Punk. It’s his milestone 30th album (#68 if you include his 38 cassette recordings). He figures that he’s been calling himself the King of Jewish Punk for about a decade, and if no one has challenged the term by now, it’s accepted. The album’s overtly Jewish content includes “Jewish Boy in the Mosh-Pit,” “Punk Rock Chanukah,” and “Exiled to the Diaspora.”

In a thoughtful review of an earlier, online version of the album, Sleeping Bag Studios noted:

Steve hears music in an entirely different way than the rest of us do. What he creates, how he creates it and even the chaotic end results obviously completely bring him joy and I’d never personally begrudge him that. As for the rest of us out there listening, though, what we hear in the mix & madness of The Gangsta Rabbi is generally overloaded, tough to separate from the swirling blend of non-stop sound & all-out punk-fueled madness. . . .

Punk music of any kind isn’t exactly supposed to be inviting or welcoming, and if we’re judging The Gangsta Rabbi on that, he’s nailing it. He makes music that is tough to love, but I do appreciate his passion when it’s there on full-display as it most often is. … There will only ever be ONE version of The Gangsta Rabbi and regardless of what you think, good or bad – to have that kind of unique and identifiable sound is still a rarity and still an achievement, and for that, I commend this guy.

The Gangsta Rabbi isn’t the King of Jewish Punk because of how esteemed or superlative his music is. He doesn’t have the most record sales or fans. There’s no one album or song that’s top of the heap. What he has done is amassed a large body of work that, in the plurality of cases, takes a Jewish punk approach. He’s certainly the most prolific Jewish punk artist. And he’s been doing it for longer than any other artist in Chapter 3 of Oy Oy Oy Gevalt! Jews and Punk.

There is one way that the Gangsta Rabbi reigns as the King of Jewish Punk. For my book and related writing, I’ve often come up with topics where I needed examples, and time after time, the Gangsta Rabbi’s vast catalog of music has had them waiting for me:

The Gangsta Rabbi is the King of Jewish Punk because so often when I’m exploring a Jewish punk topic, he has a song (likely more than one) that serves as a perfect example.