My initial impression was that Chabad Religion was as big as it gets and would “bring a new spotlight to Jewish punk like never before.” The band features Yotam Ben Horin of Useless ID, the most successful punk rock band ever to come out of Israel, and Fat Mike of NOFX, which has put band members’ Jewishness on display more frequently, overtly, and humorously than any other prominent punk rock act. Were those expectations too high for Chabad Religion’s self-titled debut, which came out on April 8? 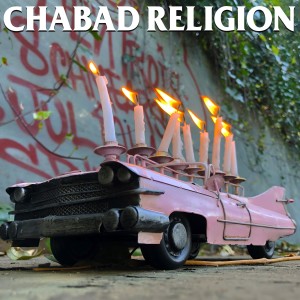 Between the prominence and proficiency of the musicians, the platform of Fat Wreck Chords (Fat Mike’s record label), and the slick production (the band is a side project of the new production team D-Composers), this release reaches an audience in a way that most DIY Jewish punk bands could never dream of. The YouTube streaming of the album alone has been viewed over 30,000 times. And yet for all the marketing spin of being “your favorite new (and only) Jewish prayer Punk band,” the songs don’t stand out much in the context of dozens of other Jewish punk bands. Fat Wreck Chords’ website advises aspiring bands looking to submit demos to “work on your songs, practice, and play shows,” because “it takes years of hard work to be a band that people care about.” A ten-song, thirteen-minute album recorded in three days by a one-off band that has apparently never played a show—and likely never intends to—doesn’t rise to that standard. The album can be streamed online and will soon be available on vinyl, but it won’t be released on CD. So Jewish punk has an odd new heavyweight: a band with potentially unmatched reach doing the bare minimum for a release, with no past and no future.

The musical highlight is the buildup in the introduction of “Hineh Ma Tov.” The most interesting, original arrangement is in “Or Zarua,” where Ben Horin repeatedly shouts the two words in the title before getting to additional lyrics in the chorus. The song that translates best to the standard Fat Wreck Chords style is “Mizmor Shir,” even though it has a slower tempo; it’s the only song over two minutes.

There’s little unique perspective or statement aside from the music itself. Fans of Fat Mike’s puns and humor will have to satisfy themselves with the Chabad Religion name and a T-shirt with a no-bacon spin-off of the Bad Religion logo. The album ends with an “Ah” harmony, which I expected to culminate in a clever “Amen,” but the second syllable never comes. I’m reminded of when Chabad Religion’s namesake released an album of Christmas songs that didn’t challenge the holiday in the manner one would expect of Bad Religion but rather just presented them in a musical style pleasing to punk rock fans.

Still, it’s remarkable that Fat Mike, who has often referred to his Jewishness for comic material but never embraced it seriously, has played on and released a full-fledged Jewish punk album. These songs are catchy renditions of familiar songs that will bring Jewish punk to new listeners. And they’ve gotten mostly positive reviews from Jewish punk stalwarts.

“For anyone who wondered what Yidcore would have sounded like if we weren’t a bunch of incompetent Aussie idiots,” quipped Bram Presser, front man of the quintessential Jewish punk band Yidcore.

“This is what I aspired to for the Schleps,” said that one-man band’s Josh Sherer. “So if you know anyone that would want to play Jewish-inspired punk … LMK! I’d be happy to start something new or ‘reset’ this project.”

As much as I’d love to hear more Chabad Religion songs and catch a live show, I’d sooner expect new material from Sherer.