Yidcore Reunite for Two Shows a Decade after Disbanding

Yidcore, the quintessential Jewish punk band, broke up in 2009. Until last month, they had only played one reunion show, back in 2011. In September, they reunited for two shows in their native Melbourne, Australia.

At the Festival of Jewish Arts and Music on September 8, Yidcore’s singer grasped a rubber chicken against the microphone and played a shofar bedecked in PETA stickers. Just like old times! The guitarist and the bassist wore a “yarmulbra” and Hasidic-inspired garb, respectively. Yidcore’s set included their blistering “Hora #5” (click here for a video) and “Dayenu” (click here for a video). All photos are from the first show. 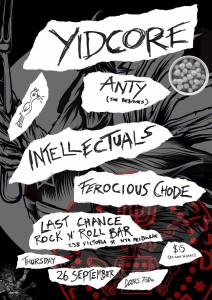 Whereas the previous performance was at a Jewish festival, the September 26 concert was decidedly a punk rock show. The Facebook page boasted, “Lock up your chickpeas! Ten years after they disappeared in a cloud of chicken soup and sacramental wine, the original punk rock schmucks in Yidcore are back. Will Adam Sandler finally let them play his song? Might Natalie Portman skank through the circle pit? Could Scrambles the rubber chicken finally get his head back? Who the cluck knows, but it will be crazy, messy fun finding out. … [G]et down to Last Chance Rock & Roll Bar … for your chance at eternal life. Or whatever crap the scriptures promise these days.”

The band added, “Four ageing schmucks destroy themselves and what little is left of their dignity for your pleasure. Come say goodbye for the last, last, last (we really promise it’s the last) time. Seriously, this whole second coming sh*t isn’t what it’s cracked up to be.”

Although Yidcore disbanded a decade ago, their legacy continued to grow for three key reasons.

First, what Yidcore did while still an active band played out in new directions. In 2011, their rubber chicken mascot, Scrambles, went on permanent display at the Jewish Museum of Australia. In 2013, Yidcore shared almost all of their recorded music for free online, and old and new fans alike have used YouTube, Spotify, and other digital means to listen to Yidcore songs. Their music continued to be praised, such as when Tone Deaf named their cover of “Lonely Jew on Christmas” one of the best Aussie Christmas songs in 2017. Yidcore’s 2005 album covering the Fiddler on the Roof score made them part of the conversation about the cultural impact of the beloved musical, including a mention in the 2013 book Wonder of Wonders: A Cultural History of Fiddler on the Roof and a clip in the new documentary Fiddler: A Miracle of Miracles.

Second, Yidcore have been one of the most prominently featured bands in my books, articles, and presentations, dating back to 2005 but especially since 2016. It’s because of my 2017 JTA article that Yidcore’s use of the shofar has been mentioned in both a Forward article and a trivia question in recent weeks. My writing about Jewish punk is why Yidcore’s music has been played on Alaskan radio (at least five episodes), a French podcast, and even a Christian punk podcast in the past thirteen months.

Last but not least, front man Bram Presser has actively told his Yidcore story while promoting his 2017 novel, The Book of Dirt. I blogged about how Yidcore came up during his New York events last year. He talked about Yidcore during his interviews on the Hevriacast and Unorthodox podcasts. After The Book of Dirt won the Goldberg Prize for Debut Fiction at the National Jewish Book Awards earlier this year, JTA profiled Presser and discussed his background with Yidcore, in an article titled “A Former Jewish Punk Rocker Wrote an Acclaimed Novel about Holocaust Memory.” In June, Presser created a playlist inspired by the book for Largehearted Boy, and he included a Yidcore song that “inhabited the same space” as the novel.

Other Jewish punk bands have come and gone since Yidcore broke up, but they remain one of the best. And they are not forgotten!