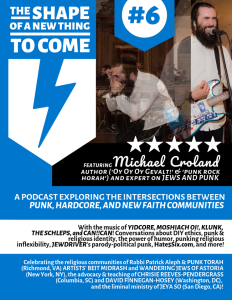 One of the best Jewish punk interviews I’ve ever done was on a Christian punk podcast! It came out this week, and you can listen here.

Adam Baker, Jason Evans, and Daniel So cohost The Shape of a New Thing to Come, a monthly podcast about punk/hardcore and new faith communities. I’ve listened to every episode, and I love their smoothly flowing conversation, their balance of faith and punk rock, and their tendency to discuss aging vis-à-vis punk in every episode. They get into serious topics and have a lot of laughs along the way, taking comfort in the camaraderie of like-minded folks. I was honored to be their first interfaith guest, knowing that the parallels between what I discuss concerning Jewish punk and what they discuss regarding Christian punk/hardcore were strong. As I noted toward the end of the episode:

What my books really explore is: How do you balance this punk rock, against-the-grain perspective or aesthetic with your religious identity and convictions? And that is the obvious parallel, whether it’s Jewish or Christian. For the people who are grappling with that—that’s what I love about your show so much. Because it’s the same thing. It doesn’t matter what label we put on it. It’s really the same struggle, and it’s honest and it’s genuine.

I delved into three categories of Jewish punk bands: punk rock bands that put their Jewish identity front and center, mostly with cultural and comedic approaches (e.g., Yidcore); punk rock bands espousing sincere religious messages (e.g., Moshiach Oi!); and bands that take a punk approach to klezmer and other types of traditional Jewish music (e.g., Klunk). The episode featured music from the three aforementioned bands plus the Schleps and CAN!!CAN.

The subject matter is familiar to people who have read Oy Oy Oy Gevalt! and Punk Rock Hora, but the interaction with the cohosts was a fresh take. Our critical look at Bad Religion was the best conversation I’ve ever had about that band; click here to read a blog post focused on that part of the interview.

After I explained what a hora is, I discussed the punk rock hora:

Me: There’s a lot more energy. People might be switching directions unannounced, might be crashing into each other a bit more. I documented numerous examples of moshing going on inside or outside the hora. You’ve got two dances taking place in a circle on the floor, and of course it’s going to be mayhem! A lot of times, people—myself very much included in this—find that kind of connection and say, Oh, OK. This is something I’m familiar with. I grew up Jewish. I know these traditions. But you can put this edgy, contemporary spin on it, and this is more relatable. This feels right to me. This is doing Judaism in my own way. And I experience that through the music and through these bands.

Daniel: I love moshing. I love getting in the pit. But I don’t like circle pits. There’s something about that energy that’s just . . . . So now I’m, like, but that sounds really fun!

Me: That’s more our speed as we get a little on in our years, right?

Does the hour-long episode leave you wanting more? Adam posted a playlist on Spotify that in theory touches on every band that came up during the episode. Some of the more obscure Jewish punk bands aren’t on Spotify, but there are songs from Yidcore, Moshiach Oi!, and Golem, plus two key punk rock bands with Jewish members, NOFX and Bad Religion. I didn’t realize that some of the bands I mentioned incidentally would make the cut, so the playlist also includes bands I love that have nothing to do with Jewish punk: The Offspring, Green Day, Flogging Molly, Dropkick Murphys, The Pogues, Gogol Bordello, The Fighting Jamesons, and Piñata Protest. There are other well-rounded selections from the cohosts, including Propagandhi and Strike Anywhere.