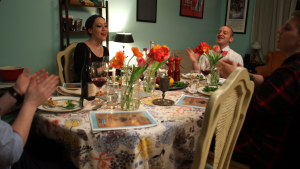 The Shondes at a seder (Photo by Jeanette Sears)

The Shondes released “True North” on their 2016 album, Brighton. Singer Louisa Solomon explained then that the song was about “being at a point in life where our ideals had taken a lot of blows, and yet, the act of imagining (a brighter future, justice, revolution, the mythical messianic ‘Jerusalem’ Jews evoke at Passover) itself could provide a kind of groundedness in conviction.” She clarified that the Jerusalem reference is a nod to “an ancient Jewish tradition of imagining,” not the city’s present-day role as the capital of Israel; the Shondes have long been outspoken critics of Israeli policy and statehood. The lyrics declare:

When we say “next year in Jerusalem”

We say “every day is revolution”

Don’t tell me hope is naïve

It can anchor any strategy

Just in time for Passover, the Shondes put out a video for “True North” last week. Bust called it “a mashup of tradition and activism,” adding that the video “weaves themes of peace, liberation, acceptance, and identity with Passover traditions.”

Parts of the video, directed by Nicole Solomon, celebrate Passover. The band members sit around a table for a seder. There’s matzoh, wine, and candle-lighting. The seder plate features a beet (a halachically acceptable vegetarian alternative to a shankbone) and an orange (a symbol of support for LGBTQ Jews). 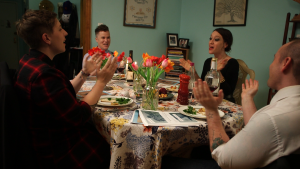 The Shondes at a seder (Photo by Jeanette Sears)

The Passover foundation allows the “next year in Jerusalem” line, taken from the Passover hagaddah, to be extrapolated in new directions. The video is an inspirational rallying cry for not giving up on your ideals. It features fans holding up signs addressing a wide variety of issues, including Black Lives Matter, education, deportation, feminism, transgender soldiers in the military, and refugees.

In a Facebook post on Monday, Louisa Solomon addressed why an anti-Zionist would use the “next year in Jerusalem” line:

I refuse to cede my ancestors’ hopes and dreams and liberatory imaginings, a life-sustaining mythos, our tradition of envisioning a better future, to a racist colonial modern nationalist project. Zionism doesn’t own Hebrew; it doesn’t own biblical history and myth; it doesn’t own Judaism. . . . Don’t cede all the semantic and discursive ground to colonizers.

Update (5/7/19): Here is a behind-the-scenes account of the “True North” video from its director, Nicole Solomon. She explains:

The song is about continuing to struggle for justice as you get older, your ideals have taken a beating, and you’re not the vim and vigor filled righteous youth on fire you once were, and we wanted to create a visual that developed these themes. … The song explicitly references the Jewish Passover holiday …. We decided to continue to reference this holiday celebrating collective struggle and liberation in the video. We decided that … we would go to Louisa’s nearby apartment and shoot some footage of her lipsynching the song, as well as of the band sitting down together at a seder — the Passover ritual in which the story of the Exodus is recounted, songs are sung, much wine (or grape juice) is drunk, and eventually a feast is consumed. Given that Nicole and Louisa are sisters and have a real Seder together every year, it all felt quite familiar and familial. We even used real Manischewitz and their childhood family Seder plate.