Last night I saw Moshiach Oi! for at least the 10th time. We’ve come a long way since I became the first person to interview the band in November 2008. Singer Yishai Romanoff is on the cover of Oy Oy Oy Gevalt! Jews and Punk, and I’ve had a great time seeing them for many years now.

After recapping the at least 18 times I’d seen Golem in June (the 19th was this Wednesday), I figured a similar post was appropriate for Moshiach Oi! I’ve seen Moshiach Oi! live more than any other artist (besides Golem) featured in the book.

February 2009 (Don Pedro’s, Brooklyn): It was Super Bowl Sunday, so a scheduled late show didn’t start until even later because the game was still going on. Moshiach Oi! was the last of four bands, which meant that they played from 1:15 to 1:45 am. There were four people (including the drummer of one of the earlier bands) in the crowd when Moshiach Oi! started playing. By their last song, I was the only audience member left and Yishai was giving me the microphone to sing the “Oi! Oi! Oi! Oi! Oi!” part of the eponymous song “Moshiach Oi!”

August 2009 (Piano’s, Manhattan): This was the CD release show for their debut album, Better Get Ready, as part of the Shemspeed Summer Music Festival. I wrote for heebnvegan, “They generated a mosh pit that at times was quite fierce, rocked out hard, and were accompanied by guest maraca player Mr. Rattles. … Despite many songs’ basic lyrics, no one could deny the power of Yishai’s words when he screamed ‘Shema Yisroel’ while crouched down in the pit.” This was the show where I met Punk Jews producer Evan Kleinman, and I can be seen pumping my fist in front of the stage at 6:04 of the documentary. The below photo was taken at another concert as part of that week’s festival, when Yishai (second from left), Menashe Yaakov (far right), and I (second from right) saw CAN!!CAN (whose singer, Patrick Aleph, is on the far left). 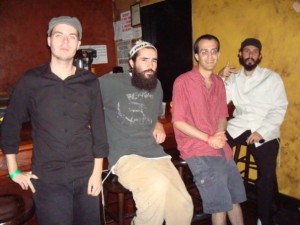 October 2009 (Millinery Center Synagogue, Manhattan): After Shabbat ended, Moshiach Oi! played a show that didn’t start until after midnight. Blanket Statementstein also performed; the band has varying lineups, but I believe this was an eight-person lineup that included all four members of Moshiach Oi! Both bands are on Shabasa Records, which is run by Menashe Yaakov Wagner, the guitarist of both groups. The below photo captures how I light up during a Moshiach Oi! show; that’s me in the blue shirt to the right. 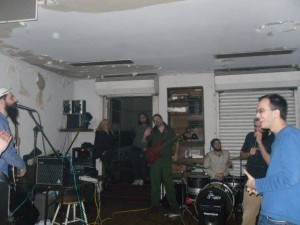 June 2010 (Sixth Street Community Synagogue, Manhattan): Moshiach Oi! played at the Punk Jews fundraising party, along with Blanket Statemenstein, Golem, and Y-Love. As I wrote for heebnvegan, “I’ve seen Moshiach Oi! four or five times, and the Punk Jews show will go down in history as the night they really came into their own. Frontman Yishai Romanoff sacrificed the intensity of a second guitar so that he could reign over the microphone and immerse himself in the pit. As he preached to the audience (which he repeatedly referred to as ‘Jewish people’) and thrashed about, he was at one with the crowd and developed a strong rapport. … If people came to a Punk Jews show craving Jewish punk music, Moshiach Oi! made sure that everyone got what they wanted.”

November 2011 (Alphabet Lounge, Manhattan): Moshiach Oi! played with Rocka Zion (a Shabasa band that includes some of the same people) and the Gangsta Rabbi, who was the very first Jewish punk artist I ever saw live (click here to read my interview with him from July). As you can hear 0:04 into this video, Yishai dedicated Moshiach Oi!’s opening song, “Baruch Hashem,” to me.

December 2011 (Public Assembly, Brooklyn): Moshiach Oi! played with labelmates Blanket Statementstein and Rocka Zion. Herring was served, but I did not partake. This might have been the first Moshiach Oi! show where I spontaneously took off my main shirt (but left my undershirt on) during the performance to feel unencumbered while rocking out.

October 2013 (Drom, Manhattan): This was the DVD release show for Punk Jews, and it was the fourth screening of the film that I attended. Afterward Moshiach Oi!, Breslov Bar Band, and Amazing Amy performed. The below photo shows me talking to Yishai at the event. 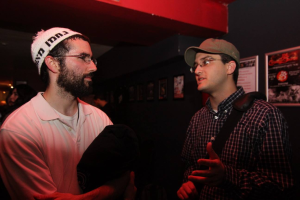 August 2015 (Creative Corner, West Hempstead): This was the first Moshiach Oi! in a long while, as Yishai had been living out of state, so Evan and I drove out to Long Island to see them. They and White Shabbos (featuring some of the same musicians) played to a crowd that consisted largely of Orthodox families. My manuscript for Oy Oy Oy Gevalt! Jews and Punk was done, but I waited until after I got home to submit it, just in case anything at the show led me to make any last-minute revisions.

June 2016 (Town and Village Synagogue, Manhattan): I was fortunate to have Moshiach Oi! play at the book release party for Oy Oy Oy Gevalt! Jews and Punk. I blogged, “Moshiach Oi! was the right band for the occasion! … Moshiach Oi! played a 45-minute set with all of my Torah hardcore favorites, including ‘Baruch Hashem,’ ‘Yetzer Hara,’ ‘Avoda Zara,’ ‘Shema Yisroel,’ ‘The Petek,’ ‘Am Yisroel Chai,’ and ‘Avraham Was a Punk Rocker.’ The latter two came up during the Q&A when someone asked me which biblical figure was the most punk, and when Moshiach Oi! performed both, Romanoff handed the microphone to me for a couple lines each.” From left to right, the below photo includes Yishai, drummer Pesach Simcha Alpert, bassist Mitch Harrison, Menashe Yaakov, and me. 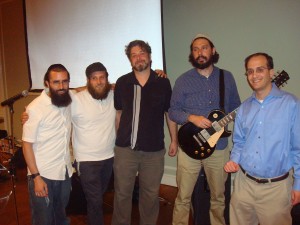 September 2016 (Millinery Center Synagogue, Manhattan): I’d seen Moshiach Oi! play at this shul before, also with Blanket Statementstein opening, but this time the show was in the sanctuary and the bimah was the stage. They played “Rabeinu’s Army” for the first time, and it was so new that Yishai took over Menashe Yaakov’s guitar because the latter didn’t know the song yet. Yishai spontaneously gave me the microphone to sing “Avraham! Avraham!” in “Avraham Was a Punk Rocker” and “Am Yisroel Chai! We will never die!” in “Am Yisroel Chai.” Once again I spontaneously doffed my shirt (but not my undershirt) to feel unencumbered while rocking out.

I feel like there might have been more than 10 shows. That might be because of all the other times I’ve seen the members of the band that don’t count toward this list. In September 2013, I saw Shabasa labelmates Blanket Statementstein, White Shabbos, and Shin Shin Mem, but Moshiach Oi! wound up not playing because of a curfew issue. I attended two Rebbe Nachman study sessions led by members of the group. I attended the premiere of Punk Jews, and Yishai was part of the Q&A afterward. I interviewed the band at Menashe Yaakov’s house twice, and I saw part of a practice the first time. I attended a film screening co-sponsored by Moshiach Oi! I’ve bumped into members of the band at countless events around town through the years.

[Update] March 2019 (Brooklyn Jewish Art Gallery, Brooklyn): At the book launch for Punk Rock Hora, Moshiach Oi! played their first show since 2017. A group of women went to the back of the room, where there happened to be a mechitza because the venue was the sanctuary of an Orthodox synagogue. The women danced together behind the curtains, without any men present. One explained, “I really was happy that women who otherwise wouldn’t be able to dance to the punk music danced anyway, because there was a mechitza.”