Isa Chandra Moskowitz is featured in Chapter 6 of Oy Oy Oy Gevalt! Jews and Punk, and the chapter title, “Post Punk,” stems from her former television show and website, the Post Punk Kitchen. Moskowitz burst onto the vegan cooking radar with that show in 2003 (including with a highly recommended Passover episode). She went on to write eight beloved vegan cookbooks, and her forthcoming ninth cookbook apparently includes a latke-heavy Hanukkah section. In Oy Oy Oy Gevalt! Jews and Punk, I discuss how Moskowitz integrates her Jewish and punk identities into her vegan cooking projects.

After opening a vegan restaurant called Modern Love in Omaha in 2014, Moskowitz officially opens Modern Love Brooklyn this Wednesday. I attended a preview night last night, and the food was indeed delicious.

The current menu includes three Jewish-themed options: Mushroom Blintz, Samosa Spiced Latkes, and an egg cream that isn’t on the online menu. I did get one of the three, the blintz. The filling was tasty without being too mushroom-heavy. The exterior was crunchy, and I would not have identified the dish as a blintz any more than a crepe or a burrito. It was served with diced beets and a nice salad with dressing.

The Seitan Chops and Applesauce was out of this world. The rosemary-breaded seitan was delectable, and both the breading and the inner consistency were terrific. I’m not a huge fan of sweet potatoes, but the pairing of the sweet apple chunks with the gingery sweet potato mash/puree expanded my flavor horizons! I tried my fiancée’s Mac & Shews and particularly liked the BBQ cauliflower.

In an interview with Paste earlier this month, Moskowitz explained that the new Modern Love location is tailored to Brooklyn. According to Moskowitz, “It’s a little more East-Coast-centric and bigger than the Omaha location, so we’re going to have things like latkes … and other Eastern European favorites.” She noted, “Say we’re going to have matzah ball soup. I don’t know if that would fly in Omaha.”

Moskowitz added, “We’re also going to have … things New Yorkers love. And then you can get them vegan here with my little Brooklyn-Jewish spin on everything.” 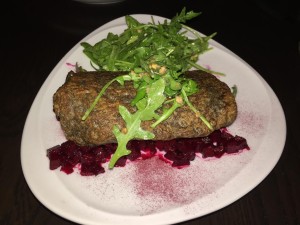 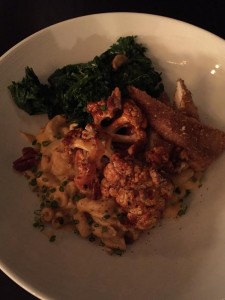 Update (11/18): The Village Voice ran an article titled “Brooklyn’s Modern Love Brings Vegan Punk Ethos to the Table.” Moskowitz noted that the menu included “Jewish food obviously” and was “really all through the lens of a Brooklyn Jew.” Here’s an excerpt:

Through her approach to cooking and cookbooks . . . Moskowitz carries a spirit of activism, a dynamic that that grew out of her involvement with punk.

“It was really direct,” she explains. “Punks were like, ‘You want to change the world but you won’t even change yourself?’ It made me want to be a better person.”

Through that subversive scene, Moskowitz could hone her craft on her own terms. “With punk, you’re always cooking,” she says. “A band is coming through town, you’re cooking for them. Food Not Bombs, you’re cooking. Potlucks. Like most cultures, it’s pretty centered around food.”