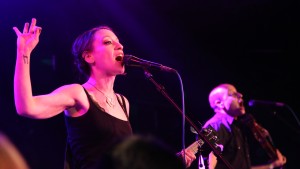 My review of the Shondes’ brand-new album, Brighton, got posted on Jewcy today. On Saturday night I saw them live for the sixth time. [Update: The tally is now eight!] In light of similar posts I’ve done for Golem and Moshiach Oi!, here’s a recap of all the Shondes shows I’ve been to through the years.

I first interviewed the Shondes via e-mail in 2008 for my former blog, heebnvegan. In 2013, I met up with singer/bassist Louisa Solomon and violinist Elijah Oberman for both a pre-interview session and an extensive interview for Oy Oy Oy Gevalt! Jews and Punk. I also interviewed former drummer Temim Fruchter over the phone for my book.

June 2009 (Wonderland, Queens): I’ve lived in Queens since 2009, and this was the only time I’ve seen one of the bands in my book in my borough. The show was only three blocks away from my apartment. I chatted with Solomon and Fruchter, whom I’d interviewed for my 2008 heebnvegan post, and came away with some recommendations for vegan ice cream in New York City. I wrote on heebnvegan, “It was the first time that [the Shondes] played the new song ‘Miami’ live. The band’s merch table featured scraps of paper for fans to write down tips for getting over a breakup; the plan is to include some of them in the Shondes’ next album.”

February 2010 (CSV Cultural Center, Manhattan): The Shondes headlined JDub Records’ punk Purim party, with CAN!!CAN and Steve “Gangsta Rabbi” Lieberman also on the bill. “It was probably the biggest gathering of Jewish punk bands since the Hanukkah tour I covered in 2006,” I wrote on heebnvegan. One second into this video, I can be seen wearing my Swedish Chef costume (it was a Purim party!) in the front row. Fruchter almost dressed up as Animal from the Muppets, and toward the beginning of this video, she asks, “In honor of the Swedish Chef, are there any other Muppets here tonight?”

June 2014 (Brooklyn Museum, Brooklyn): This was in a big atrium in the museum, which might not have been the ideal setting in terms of acoustics. In anticipation of this, the band brought earplugs for audience members. I thought that was remarkably considerate, and I did the same when Moshiach Oi! played at my book release party. I headbanged and jumped around in front of the stage. They played one of my favorite Shondes songs, “Give Me What You’ve Got,” and I wrote in my notes that there was great energy, especially at the beginning of the song. Even though I’d thought of the studio version of “Nights Like These” as a mellow song, I was struck how much the song’s bridge in particular rocked when performed live.

April 2015 (The Rock Shop, Brooklyn): This was a homecoming show at the end of a national tour. It was right before Passover, and the Shondes expressed their love of chametz. I went with my friend Dan, and we were standing toward the front.

October 2015 (Union Hall, Brooklyn): This was the first time my fiancée came with me to see the Shondes. The Shondes played the new song “Jacob and Rachel,” which was just released on the Brighton B-sides collection, and described it as a love song about the Biblical characters Jacob and Rachel. I was pleasantly surprised when the Shondes dedicated the new song to me from the stage.

September 2016 (Shea Stadium, Brooklyn): This was the hometown CD release show for the Shondes’ fifth album, Brighton, which was officially released the day before. The band began their set with “The Garden,” the title track from their previous album, but mostly played songs from Brighton. My favorite musical part from a new song was the breakdown in “Everything Good,” which is fantastic live in particular. Solomon gave me a shoutout and mentioned Oy Oy Oy Gevalt! Jews and Punk before what I believe was “True North.” (I picked up a copy of the album that night, so I didn’t know most of the new songs yet.) She quipped that the defining Jewish characteristic of the Shondes is her ability to gesticulate while playing bass.

[Update] August 2017 (Union Hall, Brooklyn): This was the Shondes’ first New York show since singer/bassist Louisa Solomon gave birth in December 2016. Amor Prohibido (a Selena punk cover band) and Choked Up were also on the bill. The Shondes opened with “The Garden.” I wrote the following about “Everything Good” in my review of Brighton last year, and I second it after this show: “The musical highlight of the whole album is this song’s breakdown, which combines Louisa Solomon’s beautiful but powerful vocals, a distinctive violin part, and crunchy guitar chords. It’s pretty and heavy, all wrapped up in one. It rocks, especially when performed live.”

[Update] January 2018 (The Silent Barn, Brooklyn): Alecks (featuring Shondes drummer Alex Smith on vocals), Talay, and Perennial opened. Alecks had just released their debut the day before, so Shondes singer/bassist Louisa Solomon sang “Siman Tov U’Mazel Tov” onstage, despite noting that Smith isn’t one of the Jewish members of the band. It was a Friday night, so at one point, Solomon wished the audience “Good Shabbos.” Before playing “True North,” she said that normally on a Friday night she’d be home lighting candles with her kid and her partner. “Everything Good” has become my take-out-my-earplugs-and-savor-this song.