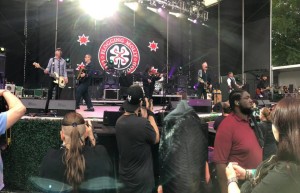 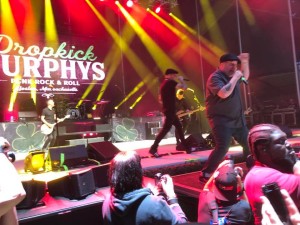 On Friday, I saw Flogging Molly and Dropkick Murphys on their first-ever U.S. tour together. I’ve now seen them about 16 and 9 times, respectively—about 25 times combined.

After I saw the two bands together for the first time in 2016, I wrote:

Being such a big Celtic punk/rock fan gave me a good template to analyze Jewish punk bands. I already understood that there was a difference between punk rock bands that incorporated Irish musical elements or put their Irish identity front and center, like the Dropkick Murphys and Flatfoot 56, and bands that played Irish music through a punk filter, like the Pogues and the Tossers. Therefore, it made sense to me to put punk rock bands that put their Jewish identity front and center, like Yidcore and Moshiach Oi!, in a different chapter than bands that played klezmer in a punk way, like Golem and Daniel Kahn & The Painted Bird.

The joint tour invited comparisons between the two bands in media coverage. I was pleased to see that Dropkick Murphys drummer Matt Kelly used the same distinction I did!

[Flogging Molly] do a style similar to what we do but more of a “traditional music with a punk edge” as opposed to the “punk with a traditional edge” that we do. . . . We’re smashingly complementary to each other.

Yeah, musically we run in concentric circles and share some influences and even instrumentation, but definitely have sounds unique to each other. The best way to describe our differences is this way: Flogging Molly is a traditional band of Irish and Scottish stylings, with some punk flourishes and influences (and energy!). Dropkick Murphys is a punk rock band which draws influence from Irish and other Celtic traditional music.

Flogging Molly and Dropkick Murphys are the biggest, most commercially successful acts that overtly combine a type of ethnic identity and traditional music with punk. It’s good to know that a key member of the latter essentially agreed with the different categories—and chapters—I used in Oy Oy Oy Gevalt! Jews and Punk.