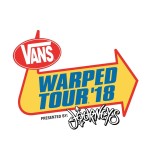 After 24 years, the Warped Tour, the iconic touring punk rock festival, concluded its final cross-country run last week. For the seven Fridays of the tour, Punk Rock Shabbat brought together Jewish punks at Warped. The weekly gathering was organized by Kosha Dillz (a rapper who hosted the event), One Table (which brings people together for Shabbat dinners), and Shabbat Tent (which does that at concerts and festivals).

It’s notable that there was an event uniting Jewish punks as part of the beloved touring punk extravaganza. Of course it had to be Shabbat to pull this off. It’s hard to imagine Jewish punks coming together at Warped without an occasion (or on any Jewish summer holidays). The attendees I spoke to had a rewarding experience.

Stephanie estimated that 10 to 15 people attended Punk Rock Shabbat in Detroit on July 20. She described the proceedings:

Kosha Dillz and I actually said the blessings together in front of everyone. We “lit candles.” We actually used 2 lighters to create this moment. We said the blessings for grape juice and challah (we had to use pita bread). Everyone got cups of juice. Everyone also poured water over their hands.

Several attendees of Punk Rock Shabbat in Camden, New Jersey, on July 13 appreciated the sense of togetherness. Draco enjoyed “how welcoming and relaxed it was” and “how it brought people together.” Maxine noted, “There’s definitely a bigger Christian presence in the punk scene, not that there’s anything wrong with that, but it was cool to feel included with my fellow punk rock Jews for a change.” Rebecca explained:

It was a small way for me to feel connected to my religion in an overall community I’m already so connected to. It was awesome to be doing the service and all the prayers while some of my fav[orite] bands played in the background. … Being able to connect with punk rock Jews allowed me to further connect with really like-minded individuals in a place that meant so much to me, Warped Tour.

“Maybe you’ll even meet some of your favorite bands!” Kosha Dillz said upon announcing Punk Rock Shabbat in June. As far as I know from reading his weekly Billboard column and following along on social media, no other Warped performers attended. Kosha Dillz and Shabbat Table did not respond to requests for comment. Here is a photo that Kosha Dillz posted on Instagram from Orlando on August 3.

The last punk rock Shabbat in orlando is lit. Big ups to @shabbattent x @onetableshabbat for making it happen all summer long on @vanswarpedtour and thank you to all my friends who have been helping me 🙂