Steve “Gangsta Rabbi” Lieberman’s days might have seemed numbered. In 2016, he talked about his battle with cancer in an interview featured on this blog. In 2018, he started hospice care. In 2019, he ominously posed next to his grave following his wife’s passing. But in 2020, that photo is an album cover, because the King of Jewish Punk is still making music. 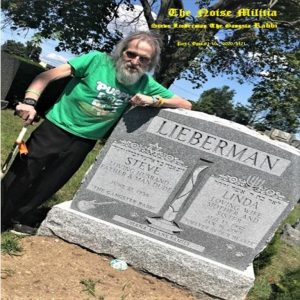 The prolific Lieberman is hard at work on his 76th album, The Noise Militia. He explained that on his “final and ongoing album,” he “creates yet another fringe genre, fusing military music and noise punk.” It’s already more than seven hours long. He said that he’s working on an opus that will set “the record length” for a single song at “over 13 hours.” Take that, 13-minute Chabad Religion album!

That’s a lot to wrap one’s head around, which is why I was so grateful to find Alex Faulkner’s thorough, thoughtful review of the first 14 opuses. Faulkner called The Noise Militia Lieberman’s “most epic” album yet. He noted, “Although the Rabbi is testing the boundaries through extreme durations, this album is actually less dissonant overall than some of his previous work.”

Some of the opuses reference Lieberman’s decade-long battle with cancer in their component song titles. Opus #10 includes “10 Years Leukemia,” “Still Here,” and “Blessed Is G-d.” Opus #8 has “Hyping Up the Charts with the Same Disease.” Opus #5 has “5 Years Terminal.” Faulkner explained that the “energy levels seem particularly intense” for the latter, “as if possessed by the exuberance of still being alive.”

Overall, this is another boundary-stretching album from a truly unique artist. … The amount of blood, sweat and tears that must have gone into this is staggering to think about. It’s a testament to his tenacity and sheer human spirit, particularly amazing knowing that he’s been fighting a terminal disease for many years. This could be regarded as his magnum opus and may in time become highly regarded by lovers of the avant garde and outsider art.