Electric Simcha put out four releases, ranging from one to three songs, in 2010. That short-lived catalog was enough for me to declare in Oy Oy Oy Gevalt! Jews and Punk that in their “sound and overall approach, Electric Simcha might have been the best effort to seamlessly pull off a musically skilled, decidedly punk take on a form of traditional Jewish music.” The Philadelphia quartet was together for about two years and took a hardcore/punk approach to Hasidic simcha music.

Since then, band leader and trombonist Dan Blacksberg has gone in different musical directions. Deveykus interpreted Hasidic simcha music through doom metal. And he’s become a pivotal figure in the klezmer scene, including releasing the first klezmer album with trombone as the lead instrument and hosting the Radiant Others podcast, featuring interviews with klezmer musicians.

Electric Simcha seemed to be confined to the past. Every time I asked Blacksberg whether there might be a reunion show, even if I could provide the gig, the answer was no. So I was delightfully surprised that Electric Simcha just released Joy, marketed as a “newly-rediscovered recording of the band at its peak” in 2011. Blacksberg gave me advance notice and said, “The album’s tracks are organized in traditional wedding-style sets played at breakneck speed and ear-splitting volume, full of screaming, pummeling blast beats, and feedback-laden guitar and bass shredding that frequently go off the rails.”

“There’s just nothing like us in any Jewish music that I’ve heard,” Blacksberg added. “I don’t think there’s much like us as a rock band either. We were really loud, and we were really, really fast.” 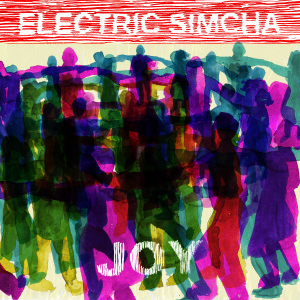 While some tracks on Joy are alternate versions of songs on Electric Simcha’s self-titled album from 2010, the 2011 recording is where new listeners should begin. “Freygish” might be a new version of 2010’s “Freygish Medley,” but it shouldn’t be dismissed. The half-minute of screaming at 7:38 is a marked increase in feverish intensity, with backing musical frenzy that rises to the occasion. The 13-minute opening track is a heavy-hitting whirlwind. Take that, 13-minute Chabad Religion album!

The first few minutes of “Simcha” showcase a distinctive sound that’s “a ridiculously overamped bass … creating a thundercloud of chaos,” as Something Else! noted. That transitions into a segment from 2010’s “Simcha Medley,” but the redundancy isn’t a negative. Rather, it’s taking the best that Electric Simcha have to offer and bringing it to a new context. This is Electric Simcha at their most rockin’. This is the awesome excerpt that I would play in my Jewish punk Powerpoint presentations! Later in the song, there’s shredding that might be the most impressive guitar work in the band’s oeuvre.

“Rachomono” is not based on any older songs, and with more vocals and lyrics, it puts Blacksberg’s singing on the front burner for the first time. Blacksberg’s background is playing trombone, not singing. His vocals in other Electric Simcha songs were screaming and shouting as part of the bigger picture. In “Rachomono,” he still isn’t vying for any singing awards, but that isn’t the point. This is DIY; there were lyrics to be sung, so he sung them. But he refused to sing them properly! He explained in Oy Oy Oy Gevalt! Jews and Punk:

I didn’t think it was important. And also, if I sang them perfectly, I might end up saying something in Hebrew that I really didn’t agree with! …

This is pretty silly, because I know and play with some of the best practitioners of Ashkenazic Jewish music on the planet, but I was purposely singing these things without really knowing, like, sometimes I would make mistakes to make sure I didn’t really know how to pronounce that word. It felt more right.

An album from 2011 might not be new, but it’s newer than 2010, and it’s terrific to get some material that fans haven’t heard before. Here’s hoping it reaches a new audience as well. As Something Else! put it, “Think of it as Jewish party music for the punk set, but you don’t have to be either Jewish or punk to enjoy the hell out of this.”