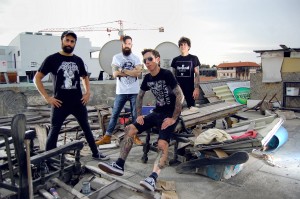 Useless ID, Israel’s leading punk rock band, didn’t want to be thought of as a political band. “State of Fear,” featured on a Rock Against Bush compilation, was a political commentary and probably Useless ID’s best known song. When I interviewed guitarist Ishay Berger after Useless ID released The Lost Broken Bones in 2008, I asked about clearly political songs like “Misconception.” “There’s more to our band than politics, so we deal with it, but don’t want to be 100% recognized as the political band from the Middle East,” said Berger. “We’re much more into being that hard-working, real-deal band from Israel.”

Useless ID’s new album, State Is Burning, comes out tomorrow, and the band has made a deliberate decision to be more political. “So much has been going on in Israel these past few years that even as a citizen who normally decided to stray away from politics, I had no choice,” said front man Yotam Ben Horin. Guitarist Guy Carmel added, “We wanted to start dealing more with other issues, less personal and more global. It all made sense coming from this place (Israel) that the media has so much to say about but half of the time doesn’t even know or understand at all.”

The album cover hauntingly depicts a war zone in Jerusalem, with tanks, skulls, and the Dome of the Rock. The minute-long lead-off track, “Land of Idiocracacy,” is a scathing political and social commentary about Israel. It includes the lyrics “The Bible’s just a book/ Look at the [either “lies” or “lives”] it took/ F*** the right-wing Orthodox.” “How to Dismantle an Atom Bomb” addresses the dangers of facing a potential nuclear attack. The title track “State Is Burning” talks about living with “the enemy.” 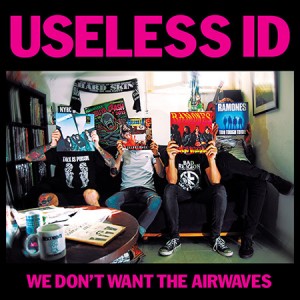 The cover of the EP

Not everything is political, though. The album includes “We Don’t Want the Airwaves,” which was also the name of an EP that came out in May. It’s a tribute to the Ramones, with Ramones references interspersed throughout and the lyrics “The Ramones are the ones for me.” For the song’s forthcoming video, Useless ID asked fans to submit photos of themselves with Ramones gear.

State Is Burning is coming out on Fat Wreck Chords, the record label run by NOFX’s Fat Mike. At least for now, the entire album can be streamed for free by clicking here.