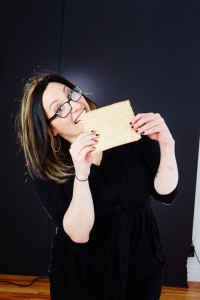 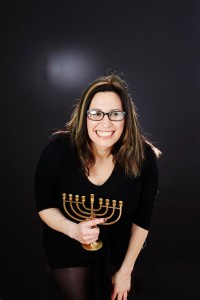 In Oy Oy Oy Gevalt! Jews and Punk, I discussed how Isa Chandra Moskowitz integrated her Jewish and punk identities into her vegan cooking projects. Her ninth cookbook, The Superfun Times Vegan Holiday Cookbook, came out last week and featured more overtly Jewish recipes and references than any of her other cookbooks!

Moskowitz often took a humorous approach to describing Jewish cuisine and customs for a mostly non-Jewish audience. She acknowledged that “eating fried pickles dipped in cool ranch on Hanukkah” wasn’t the “the type of thing a nice Jewish girl from Brooklyn would ever think of doing.” Moskowitz explained the nature of Hanukkah: “Yeah, there will be some dreidel spinning and maybe you’ll listen to some Beastie Boys, but the main event is going to be … frying. Everything. With wild abandon.” For her Charoset recipe, she wrote:

Charoset is not pretty. You can dress it up if you like, but it’s ground-up nuts. And apples. And dates. And it’s a million shades of brown. And then you spread it on a piece of beige matzoh. And that, my friends, is life. Your charoset is not going on Pinterest. It’s going in your mouth. And it represents mortar and sand and the desert and slavery, so appreciate it for its good qualities. I grew up making it by hand, not in a food processor (did the Israelites have a food processor?), and so shall you.

Moskowitz largely left punk on the back burner in this book, but she did have a sense of playful irreverence at times. She put the hamantaschen recipe in the Hanukkah chapter and said, “Hamantaschen are typically served at Purim, but who cares?” For her sufganiyot recipe, she wrote, “I really don’t believe any of the Hanukkah stories about oil lasting for eight days. I think someone in a little village just really wanted jelly doughnuts one day, so they made up the whole thing.” She noted that on Yom Kippur, “the matters at hand are so much more important than food,” but “even after so many years of Jewish sleepaway camp, I’m still not sure I know what the matters at hand are.” Moskowitz repeatedly invoked her Jewish identity, but she wasn’t preaching about religion.

Moskowitz even managed to incorporate her Jewishness in the chapters on New Year’s, Chinese New Year, Cinco de Mayo, and Christmas. For the latter, she wrote, “Since I won’t shut up about it, you probably realize that I was raised Jewish.” By the last chapter, it was hard to miss.