Warning: Sometimes punk rock can be offensive and shouldn’t be taken at face value! 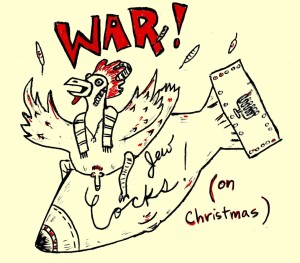 I learned about the Jew Cocks too late to include the outrageous LA punk rock band in Oy Oy Oy Gevalt! Jews and Punk, but I blogged about them in January.

The Jew Cocks are not the first Jewish punks to express discomfort with Christmas in their music. Yidcore covered “Lonely Jew on Christmas” from South Park. The repeated line “No presents for Christmas!” was an audience participation part when Sons of Abraham performed “Termites in His Smile” live. NOFX (which features Jewish members Fat Mike and Eric Melvin) went all out in their song and video “Xmas Has Been X’ed.”

I don’t endorse any of those songs, but there is a pattern worth noting. Prefer to focus on Hanukkah instead? Check out my article for Jewcy recommending Hanukkah punk rock songs for all eight nights of Hanukkah!