Jew Cocks: Circumcised for Your Pleasure!

I had a feeling that I’d find out about another Jewish punk band once it was too late to include the group in Oy Oy Oy Gevalt! Jews and Punk. So instead, appearing on this blog, are the Jew Cocks! Warning: Sometimes punk rock can be offensive!

The LA-based band released its first full-length album, Full Release, in July. The album cover featured an anthropomorphized penis wearing various Jewish signifiers (a yarmulke, a Star of David necklace, and a tallis) and standing in a pool of semen, above the words “Circumcised for Your Pleasure!”

Todd, the Jew Cocks’ singer, wanted to have records “packaged in large condom foil wrappers,” but this turned out to be cost-prohibitive. Instead, the band paired the custom artwork with actual condoms. Maybe the condoms don’t play music when placed on a record player, but there is a download code for the digital album on the packaging.

The song “8” of Hannukah” talked about the Festival of Lights in an explicitly sexual way. The lyrics discussed “8 inches of Hannukah between your thighs!” Todd added that there’s more to the song:

“8” of Hannukah” was a response to the dearth of modern Jewish holiday songs (and the title a pretty easy Jew Cock joke). Lyrically, we discuss some mythological/pagan origins of the modern Judeo-Christian faiths and the anti-consumerism, “be thankful for what you have” traditions of which the holidays may be based (1 day of oil lasted for 8 days — whoa!). 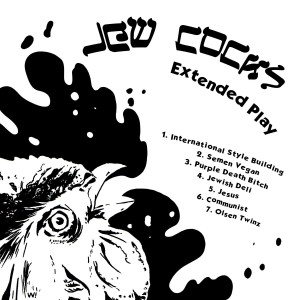 The Jew Cocks released an EP in 2014. The cover featured a cock (rooster) and Hebraic-style lettering for the band’s name.

According to Todd, the song “Jewish Deli” was based on an experience when he overheard “somebody walking down the street offhandedly [state] that ‘the only real deli is a Jewish deli.'” The lyrics matched Todd’s description almost verbatim. Vegans, have no fear! While “Jewish Deli” might not be for you, there is a song on the EP for vegans.

The words PUNK and JEW have both been used as derogatory and exclusionary terms, but have been appropriated by the groups they denote, and thereby reframed as positive and inclusionary labels, at least within these groups. This has also been a fruitful strategy for excluding SQUARES and boring GENTILES. In many ways, to be a PUNK is not unlike being a JEW: there are uniforms for the different factions, agendas/values that cover a broad spectrum, from liberal to extremist, intellectual to (quasi) religious, ascetic to celebratory.

I think the band really plays with what remains of the gentile fear of Jews, which is steeped in centuries of really bananas conspiracy theories and Christian propaganda. At this point, it’s pretty ridiculous for anyone to think that either Punk or Jews are dangerous or threatening [to] the mainstream Christian establishment. But that bullsh*t is still in many idiots’ heads, so we might as well derive some power and swagger from it, while making [fun] of it.