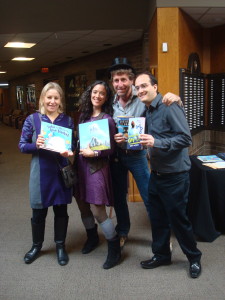 Yesterday I spoke at the Toledo Jewish Book Festival in Ohio. My session was meant for 8th-to-10th graders, as part of an event geared toward four different grade/age brackets between kindergarten and 10th grade. The program was billed as “Blankies, Dreidels, Punk & Friendship,” incorporating the themes of the four different “children’s books.” Of course, Oy Oy Oy Gevalt! Jews and Punk is not a children’s book. It’s a scholarly book aimed at an adult audience, with parts that are inappropriate for children. I did have to take out some of the content that I’ve used in past presentations.

The topic was a terrific fit for 8th-to-10th graders. Punk is often characterized as a youth subculture that speaks most to teenagers. When I saw a 13-year-old girl wearing a Green Day shirt and a teenage boy with dyed orange/red hair, I knew I was in the right place.

Some of my standard presentation content worked very well for this audience. I kept in some bands that didn’t particularly have tie-ins to teens, like Di Nigunim, Golem, Daniel Kahn & The Painted Bird, and Electric Simcha. I talked about the teens who danced the hora at a Yidcore show in Berkeley and the teens who formed KOSHER. As usual, I read this account from KOSHER’s Alicia Jo Rabins:

I think KOSHER was part of something bigger than us: young American Jews experimenting with different ways the Jewish part of them and the American part of them could interact.

I mean, there we were, a bunch of eighteen-year-olds in suburban Baltimore, and on the one hand we went to public schools and were into punk rock and local bands, and on the other hand, we grew up eating kugel and charoses and not having Christmas trees and all that stuff. . . .

Some people choose to just focus on one of the worlds, and some people try to integrate them. And I guess we were trying to integrate our Jewishness and our political values and our artistic aesthetic. Playing in KOSHER was a way to say, “I have a lip ring and green hair, and I’m also gonna fast on Yom Kippur, and I’m not going to deny either of those things.”

I added content that’s in the book that I don’t typically focus on. I explained how the Orthodox teenage guitarist of 7Seventy didn’t want the band to be too edgy or else he might have gotten kicked out of his yeshiva. I mentioned how the Schleps served as a way to say “there’s a way to connect with your heritage and your culture where you don’t have to feel like a square, where you don’t have to conform to traditional values which are contradictory to your contemporary lifestyle.” I discussed the two young adult novels featured in Chapter 5: Tales of a Punk Rock Nothing (by Abram Shalom Himelstein and Jamie Schweser) and Never Mind the Goldbergs (by Matthue Roth).

I appreciated the questions during the Q&A, from teens and adults alike. I was grateful that some Michiganders drove in for the event, including my friend Nausheen and former Teruah blogger Jack Zaientz, who’s quoted in multiple chapters of my book and who reviewed Chapter 3. (Check out his presentation “The Silver Age of American Jewish Music Is Happening Now! And You’re Missing It!”) I enjoyed spending time with the other authors and the festival staff/volunteers, who went above and beyond to accommodate us. I’m glad I got the chance to participate, and I’ll keep my fingers crossed for more invites through the Jewish Book Council network! 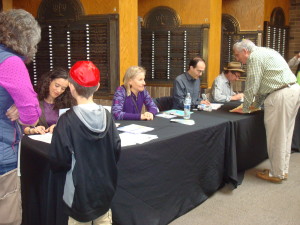 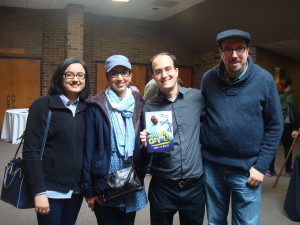 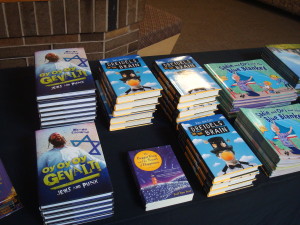