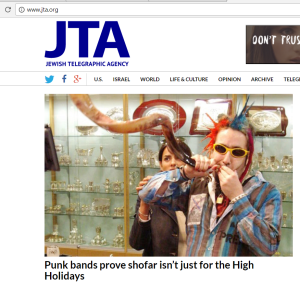 I wrote a feature for JTA about Jewish punk bands’ use of the shofar, which was first published on August 23. The article talked about Yidcore, Schmekel, and Steve “Gangsta Rabbi” Lieberman. Here’s an excerpt:

Presser, 41, played the shofar on at least 10 Yidcore songs. He explains that in the 2004 song “Hora (New Version),” the sequence of teruah, shevarim, and “tekiah gedolah” (“great blast”) created “general cacophony” and “irreverent chaos.” In “They Tried to Kill Us. They Failed. Let’s Eat!” the shofar was part of a jubilant celebration.

Not every Yidcore song with a shofar was for the sake of punk rock frenzy. The lyrics of the Hebrew song “Hakotel” mention a shofar at the Kotel, the Western Wall, and when Yidcore covered the song in 2002, Presser played standard shofar parts to “create a bustling Kotel scene.”

“The shofar is essentially an ancient instrument,” Presser said. “Why shouldn’t it be played like one?”

“That it also makes a great siphon for alcoholic beverages is just an added bonus.”

If the article leaves you hungering for more punk songs featuring shofar, you’re in luck. This past Tuesday, the one-man Jewish metalcore band The Schleps released a new song, “Tekiyot.” It’s a rockin’ shofar tutorial. Joshua Sherer, who handles vocals and all instruments for The Schleps, calls out for tekiah (a sustained blast), shevarim (three broken sounds), teruah (nine staccato sounds), and tekiah gedolah (great blast). He then plays those standard sounds on the shofar, with his signature Jewish metalcore in the background.

“Let’s ring in the New Year together with this enthusiastic thrashing of the timeless Tekiyot [shofar blasts],” The Schleps posted on Facebook. “An early L’Shana Tova to you and yours for a happy, healthy New Year, and a special thanks to my late mother-in-law Adelle, for gifting me with the shofar as a gesture to welcome me into her family shortly after I proposed to Jessica.”