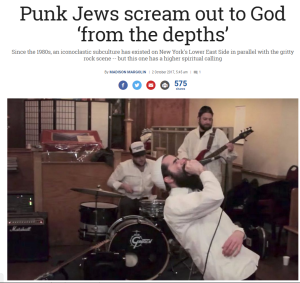 On the heels of their new album, Rock Rabeinu (click here to read my review), Moshiach Oi! was featured in the Times of Israel. The writer also interviewed members of two other Jewish punk bands, the Shondes and Asher Yatzar.

I’m quoted extensively in the article. Here’s an excerpt:

Among the ranks of Jewish punk include other outfits such as The Shondes (Yiddish for “disgrace”; a New York-based radical, political, feminist, queer, indie/punk band), Gefilte Fuck (a “Yidcore” band from Los Angeles), The Groggers (a New York-based pop punk band named for the Purim noisemaker), and Asher Yatzar (a Chicago-based punk band whose namesake is the prayer for after one uses the toilet).

But as Croland notes in his book, most Jewish punks would resist being stereotyped or lumped together; they’d rather be known for how they “do Jewish” in their own way.

That said, Jewish punk has a few of its own hallmarks.

“Both Jews and punks have histories of being outsiders. When these two identities converge, Jewish punks relate to the outsider identity from both,” Croland says.

There’s also something about the prevalence of both Jewish culture and punk rock in New York, he adds. Near the Lower East Side, once home to hordes of European Jewish immigrants, Hillel “Hilly” Kristal opened the iconic punk rock nightclub CBGB at 315 Bowery in 1973.

“CBGB in the 70s and everything since makes it a very special place to create art from both a Jewish perspective and a punk perspective,” Croland says. . . .

Today, Jewish punks have maintained an element of that original hardcore toughness, central to punk rock’s genesis. They’re not “weak, obedient mamas’ boys,” says Croland, but unique and in your face.

“They’re living their own Judaism in their own way, not necessarily wanting a rabbi or community telling them this is the way it has to be done. DIY [do-it-yourself] is at times synonymous with punk rock,” he says.