I’m excited to premiere the video for the Shondes‘ “Wrong Kind,” off their 2016 album, Brighton! The song’s “F*ck that noise!” sing-along has been a feature of live shows in recent years, and the video has an awesome zine aesthetic.

Louisa Solomon, the Shondes’ singer and bassist, reflected on how when she was growing up, she felt she “was ‘too much’ of one thing or another.” She hoped that by discussing it in this song, “others would connect with the feeling of being ‘the wrong kind’ of something or other.” She added:

The truth is that a lot of our formative trauma stays with us throughout adulthood, and even when we have worked on ourselves, learned a lot, etc., it sometimes helps to affirm ourselves about things that hurt us way back when. They don’t just go away. And through the work of healing, we can become more effective agents of change, more empathetic and critically minded people.

While this might not be the Shondes’ most punk rock song musically, Louisa noted that “it’s punk af to have the chorus of your song cheerfully shout ‘F*ck that noise!’” She pointed out that music can “psych us up, bolster us, for difficult work” and hoped the song had “some capacity to do that” for listeners.

Nicole Solomon, Louisa’s sister, directed the video, compiling footage into what she called a “virtual zine.” Nicole created the zines Shark Hospital and Silver Rocket in her formative years and thought that zines and the surrounding community “may have saved my life as a depressed, alienated teenager.” She explained her approach to the video:

“Wrong Kind” is an outsider anthem about disregarding judgmental jerks and celebrating what makes us different. Louisa and I used to make zines together in the ’90s, and they were a (maybe THE, at least for me) key way we connected with other square pegs, so to speak, so when Louisa had the idea that we could get friends to lip-sync the song, making it into more of a communal rallying cry, the zine element as I recall just organically emerged as an aesthetic idea out of this shared history. Before the internet, zines were how we connected with other “wrong” types. As we both have so much affection for the style of sloppy, scissors-and-glue-sticks zines we used to make, it was an appealing way to unify the lip-synced footage in a way that felt appropriate to the song’s theme. I see it as a kind of love letter to both zines and all the awesome people who have been told they’re “wrong” for one terrible reason or another. 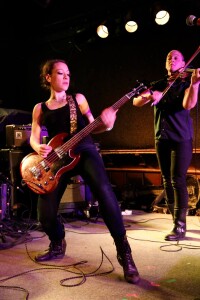