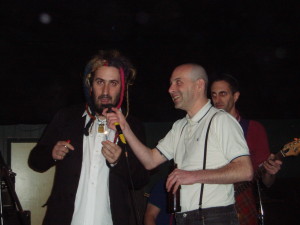 On the first night of Hanukkah in 2006 in San Francisco, Yidcore singer Bram Presser lifted up a candle and recited the menorah blessings as Jewdriver singer Ian Stuartstein held the microphone.

I’ve written about Hanukkah a lot over the past decade and a half. From Jewish punk to vegan food, here are some highlights all in one place!

In 2018, I blogged about coast-to-coast Hanukkah concerts and airplay for Jewish punk bands, including Golem, Jewdriver, Shtumer Aleph, and the Debaucherauntes. In addition, I wrote about all the Golem Hanukkah concerts I’d been to through the years for Hevria:

At this year’s Hanukkah show, Golem opened with their “anthem,” “Odessa.” A spirited hora broke out during “Mazel.” Of course they played “Freydele,” which is about a meydele named Freydele who plays with a dreydele (dreidel). They had the “world premiere” of a Hanukkah song discussing miracles and eight days.

For the encore, Golem played the classic Yiddish song “Rumenye.” Singer Aaron Diskin always includes a manic rant in the middle of the song, where the first half ends with the word “minor” and the second half ends with “major.” In honor of Hanukkah, Diskin screamed about how darkness made him feel minor. Then he noticed “little Hanukkah candles”—there was a menorah on a monitor—that mesmerized him. He said they were destructive, as if they wanted to consume the whole world. The flames made him feel major!

In 2006, I covered a punk Hanukkah tour featuring Yidcore, Jewdriver, and the Zydepunks for the Forward. Read a much more detailed account of my experiences in the opening chapter of Punk Rock Hora, and check out the photos I shared in a 2016 blog post. The Forward article began:

To commence each show on the Eight Crazy Nights tour, a flame was colored in above the menorah drawn on a bass drum. The drum set was then shared by three Jewish-oriented punk bands that joined forces to celebrate Hanukkah in West Coast punk venues. The tour featured a magical world where Manischewitz wine flows like water, a limitless supply of bagels is available for noshing and throwing, and yarmulkes are worn just for fun.

On heebnvegan, I blogged about vegan food for Hanukkah celebrations in 2006 and 2009. The former blog post included my letter to the editor from the Jewish Journal of Los Angeles, in which I talked about how traditional Jewish foods for Hanukkah and other occasions could easily be made vegan. I wrote “Latkes with Purple Potatoes: An Essay” for the now-defunct NewKosher.org in 2010; it can be found in NewKosher Cookbook: Your Favorite Jewish Vegan Recipes! (click here for a free PDF), which was published in 2011.

At a vegan Hanukkah dinner in 2009 at New York’s Sacred Chow, I enjoyed mushroom-barley soup, challah, seitan brisket, latkes, and a jelly roll.