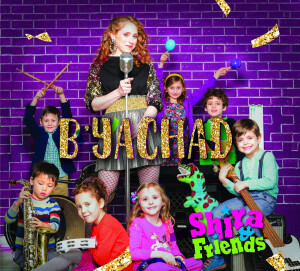 Seven of the eleven songs deal with Jewish holidays: Rosh Hashanah, Sukkot, Hanukkah, Tu B’Shvat, Passover, Purim, and Shabbat. “Make Some Noise!” is an expression that conjures up the image of an emcee riling up a crowd, and it’s a good fit for a Purim song about making noise upon hearing Haman’s name. Parts of “Come to My Sukkah” (Sukkot) and “Tell the Story” (Passover) sound like they’re ’80s Madonna songs, which will delight many parents.

The Shabbat-themed mash-up “There’s a Dinosaur / Bim Bam” appealingly mixes up musical styles. Sometimes it’s reminiscent of a hip-hop remix, a funky bassline stands out in the “There’s a Dinosaur” verses, and there’s a Middle Eastern vibe in the “Bim Bam” chorus. Put it all together, and it’s one catchy earworm. Adorably, a cartoon dinosaur plays air guitar in the video!

The banjo-prominent “Todah Rabah” (Hebrew for “thank you very much”) is a fun sing-along celebrating different things that kids can feel grateful for. When Shira & Friends released a video for the track in May, it took on new meaning. Shot entirely on cell phones at children’s homes, the video shows kids holding up signs thanking essential workers during the coronavirus pandemic.

“I wrote this song a few years ago because I felt that there was so much to be grateful for on a daily basis. I wanted to teach my students to take a moment to notice the things that make them smile each day, and to say thank you for them,” Kobren said. “Now that life has changed so drastically, there are still things for which all of us can be thankful, but they might be things that we never thought about before. For the video, I asked my students and their families to tell me what they are most thankful for right now.”