Menorahs and Dreidels for Shiragirl, NOFX, and New Found Glory

Shira of Shiragirl, Eric Melvin of NOFX, and Jordan Pundik and Ian Grushka of New Found Glory acknowledge their Jewishness from time to time, but they don’t put it front and center to the extent that bands like Yidcore and Golem do. In a year when in-person Hanukkah events couldn’t happen, it was gratifying to see their celebrations of Hanukkah online! 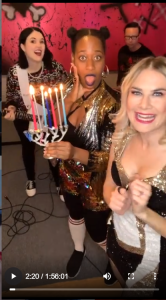 Shira has hosted Gritty Rocks Live streams during the pandemic, and Tuesday’s was a holiday special. Click here to watch the full stream. At 1:15, she begins lighting a menorah, and at 1:35, she recites a Hanukkah blessing while a drummer plays a beat. At 3:40, she plays her “Hanukkah Song,” holding up chocolate gelt and a dreidel along the way. As far as Hanukkah songs go, the full studio version from 2011 is all-encompassing in discussing both the historical and celebratory aspects of the holiday.

“In January of this year, Gritty began as a monthly concert at The Satellite in Los Angeles, but it was soon adapted to an online format due to the COVID-19 pandemic,” a press release explained. “Despite the setback, Gritty Rocks Live (GRL) launched virtual tours that featured female artists from cities all across the country, raising thousands of dollars for charities including ACLU and Headcount. The Holiday Special, hosted by Shiragirl and Bodacious Thang, will be a live fundraiser for The Sidewalk Project, benefiting houseless communities across the country.”

Shira also posed with a menorah in a photo she shared on Instagram last night. She wrote, “I’m not religious, but I love holidays and rituals.”

In naming Jews in prominent punk rock bands, Yidcore’s “Punk Rock Chanukah Song” declared, “Fat Mike and Eric Melvin light a NOFX menorah.” That was poetic license, considering that guitarist Melvin has acknowledged that, when he was growing up, “Even though we were Jewish we celebrated Christmas every year.” But on the third night of Hanukkah, Melvin lit a menorah and shared a photo on Instagram.

A post shared by Eric Melvin of NOFX (@eric_melvin)

New Found Glory’s holiday show tonight focuses on Christmas, but it includes some Hanukkah content! Yesterday the band released the photo below as well as a promotional video in which singer Pundik and bassist Grushka play dreidel in front of a menorah. After spinning a dreidel, Grushka excitedly says, “Oo, big spin! Big spin, baby! Come on, big money! No whammies!” Pundik attended a Hanukkah celebration on New Found Glory’s 2002 DVD, he acknowledged Grushka and then-guitarist Steve Klein when he sang “Happy Hanukkah to Jews” during “The Christmas Song” at a 2009 concert, and the band included that song and lyric on their 2012 Christmas cassette. Click here to read New Found Glory’s Jewish highlights in a blog post I wrote after seeing them live last year.

Will Ian take all of Jordan’s cookies in a rousing game of dreidel? 🍪 Tune into Home For The Holidays *tomorrow* to find out! https://t.co/yxQ2SMl2Qe pic.twitter.com/Q31oPibp9c

I usually blog about the Jewish output of the bands featured in Chapters 3 and 4 of Oy Oy Oy Gevalt! Jews and Punk, but this Hanukkah, Chapter 2 artists shined bright.