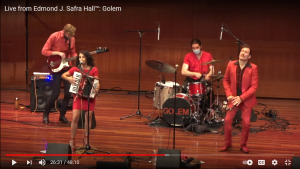 Since my first Golem concert in 2006, 2020 is the first year I haven’t seen them live. Livestreams are all the rage during the pandemic, as I discussed in my last blog post, and Golem had their first on Sunday at New York’s Museum of Jewish Heritage. If I can’t see Golem in person, a rockin’ livestream with good sound quality is the next best thing. After asking around on Twitter, I won’t add the livestream to my list of every time I’ve seen Golem live, which remains stuck at twenty-seven.

Our last performance was on Purim, March 9, so it’s been a while. And it has been a rough year: the pandemic and the country is divided and everything is tough. But I think there’s one thing that everybody can agree on, and that is the words to this next song by the American philosopher Mel Brooks.

Last week, Golem appeared on the Netflix show Dash & Lily. Dash challenges Lily to do something out of her comfort zone and “get weird.” He dares her to attend a Hanukkah Jewish punk show at 2 a.m. in the basement of Yonah Schimmel Knish Bakery on the Lower East Side. The clubbing vibe portrays “Jewccore” as hip! The band is the punningly named Challah Back Boys, fronted by two characters from the show and with the members of Golem as the instrumentalists. “Odessa,” which Kogan has called Golem’s “klezmer-punk anthem,” can be heard as Lily enters the venue. For the climax, the Challah Back Boys perform “7:40,” which the show wanted because it’s “an anthem of Jewish angst,” Kogan explained during the livestream. In Oy Oy Oy Gevalt! Jews and Punk, Kogan said that, more so than most Golem songs, “7:40” was “punk rock,” and Golem’s other singer, Aaron Diskin, declared it was the Golem song that came “closest” to punk rock.

As a longtime Golem fan, I found the “7:40” scene to be surreal. The frenzied music inspires Lily to come out of her shell! She spontaneously reacts with exuberant, bold, awkward dance moves, including in the center of a hora. I’ve been known to let loose when Golem rocks out, and the show features Golem at their most punk rock in order to achieve this key character development!

My Google Alert for “Jewish punk” was active, with such varied publications as the New York Post, Vulture, and The Hindu bringing attention to Jewish punk. Alma said one of the episode’s “few highlights” was “the real-life band Golem plays a punk Klezmer song.” Kveller went into the most depth about the Jewish punk show and even quoted a certain book:

During the concert, Challah Back Boys lead singer Dov (Nick Blaemire) gives the rowdy audience a Hanukkah primer, “in case you slept through Hebrew school.” He explains that a band of Jewish rebels were driven from their temple, but that they took it back and then partied for eight straight nights. Yes, this may be an oversimplification of the Hanukkah story, but it’s still accurate! He then says, “And that’s the spirit of Hanukkah. Rising up against your oppressors. Not letting other people define you. What’s more punk than that?” So true.

He then sings the song “7:40” by the band Golem. According to the book Oy Oy Oy Gevalt! Jews and Punk, by Michael Croland, the song is “about a Jewish man in the Soviet Union who yearned for religious freedom so that he could practice as an Orthodox Jew. . . .

Lily doesn’t want to go to the concert at first — she begs her brother, Langston, to get her out of it. But he tells her she has to go and says, “A Jewish punk show? Jewcore? I love New York.”

At the concert, there are people wearing tzitzit and kippahs, as well as people who aren’t Jewish at all. As lead singer Dov says, “Goyim are welcome!” When Lily runs into someone from her Christmas carol group and asks why she’s there, she responds, “Are you kidding? This music is lit.”

Golem also appeared on the Amazon show Hunters earlier this year, playing the band at a Jewish wedding. Considering that I’ve enjoyed Golem at my wedding, a strangers’ wedding, and a fake wedding, this was excellent casting!