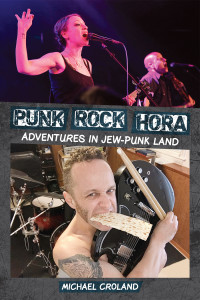 Punk Rock Hora: Adventures in Jew-Punk Land was published in January, and I’ve been thrilled with the response. The book was a #1 best seller in Jewish music on Amazon. I had a rockin’ book launch at the Brooklyn Jewish Art Gallery, and I did additional events around New York City. The book has gotten love from as far away as Alaska, the U.K., France, and Australia, with articles, podcasts, and even a radio special. Here’s a recap all in one place!

On Monday, Hevria published a thoughtful, in-depth interview with me. Hevria noted that Punk Rock Hora discusses “Croland’s experiences going to shows, befriending bands, and becoming deeply involved in an extremely niche scene.” The article added, “Croland has a perspective on self-discovery and culture that seems definitively unique. . . . A fun read and gives clear insight into Croland’s energetic, youthful obsession as well as insight into a sometimes irreverent and always loud and diverse Jewpunk culture.” In addition, the day before the book came out, Hevria ran an article by yours truly titled “Why I Keep Going to See Golem Perform.”

Last month, I was the Jewish punk guest on the Christian punk podcast The Shape of a New Thing to Come. I was honored to be their first interfaith guest, knowing that the parallels between what I discuss concerning Jewish punk and what they discuss regarding Christian punk/hardcore were strong.

In May, Bram Presser (of the Australian band Yidcore) appeared on Tablet‘s Unorthodox podcast and said, “There’s a book by Michael Croland, Oy Oy Oy Gevalt!, and then he’s got the Punk Rock Hora follow-up. And it’s very strange ’cause a lot of it is about Yidcore, and it’s really weird reading about yourself . . . . But it’s cool. It’s amazing.” In addition, Presser tweeted, “I bloody well loved Michael Croland‘s Punk Rock Hora. A devotional symphony of words to the most obscure musical genre ever, written by its most fanatical listener. Awesome.”

In April, Moment published a feature titled “The Jewish History of Punk.” I was quoted extensively as an expert.

In February, I was the guest on a “Saturday Nite Special” on KRNN Juneau (Alaska). The host, Johnny Negotiable, said, “Punk Rock Hora, which is Michael’s love song to this genre. . . . He’s passed the Manischewitz bottle around the mosh pit, he’s watched singer and audience have a bagel fight, he’s danced the hora with the volume cranked up. . . . One of the thrills of the book is seeing you get more and more involved in the subject. You’re certainly not a passive observer at all but, increasingly, an active participant in the Jewish punk scene. A real do-it-yourself spirit! . . . Punk Rock Hora’s a lovely book. It really is.” (Update: When Johnny had me back on in December 2019, he said, “Your prose is infectious. It really brings people back to the music, which is the best thing that a book like that can do.”)

In December, Reviews by Amos Lassen had a nice review: “Very informative and fun-to-read book. Michael Croland has been following Jewish punk bands since 2005 and has been to many, many concerts and has gotten to know and to interview many musicians. He is an authority on the subject and eagerly shares what he knows. . . . I really had a great time reading this book—in fact, I enjoyed it so much that I read it in one sitting and then began looking at webpages of the bands. Reading Croland was like sharing an afternoon with a friend who has many new things to tell me.”

In December, the European Institute of Jewish Music had this to say: “Talks about the musicians who combine punk rock and Judaism, be it at a cultural, identity, musical aspect, or the three at the same time. . . . Speaks of the Jew-punk phenomena.”

I appreciate all the feedback on Facebook, Twitter, Amazon, and Goodreads too. Here’s a gem from Goodreads: “It is very enjoyable! . . . I loved Oy Oy Oy Gevalt! Jews and Punk and it was great to re-meet bands from that book and find out about newer bands, sending me to the internet to hear their music and causing me to lament that my local record stores are lacking in a ‘Jewish Punk’ section. I hope the author continues to write about this particular scene, not least because his writing style is very engaging. But if he doesn’t, the two books he has provided us with are absolute treasures!”