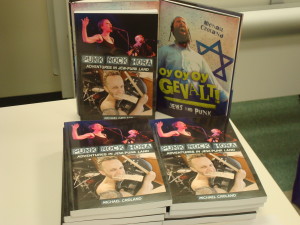 I focused on punk rock hora stories from Punk Rock Hora. I read between-chapter interludes about Yidcore, Schmekel, Golem, Me First and the Gimme Gimmes, Damn Dirty Commies, and Gefilte F*ck and excerpts from Chapter 1 about Yidcore and Golem.

The headliner was folk musician Dan Rauchwerk, who was celebrating his debut solo album, We Are More Than What We Leave Behind. Also on the bill were Dan’s sister, Autumn Rauchwerk, who read poetry, and Jordan Kutzik and Rachel Field Kutzik, who are launching a Yiddish children’s publishing company. Kinder-Loshn Publications.

I wore a Moshiach Oi! T-shirt. 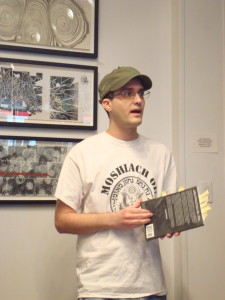 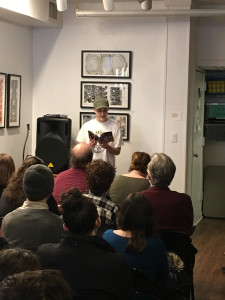 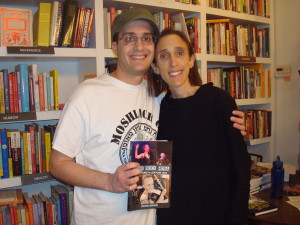 With my wife, Tamara (Photo by Michael Rauchwerk)

Dan Rauchwerk and I had a double-header weekend in far-flung NYC neighborhoods! We largely had similar sets compared to today’s event. Because I had a little more time, I read a second Schmekel interlude and added a Jews from the Valley interlude. I also did a Q&A.

I wore a Shondes T-shirt. 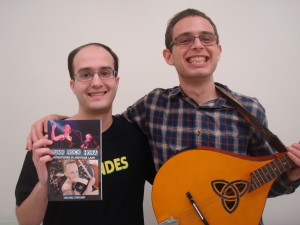 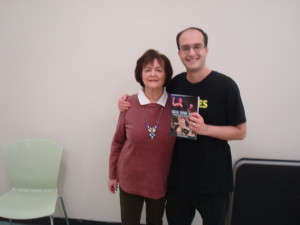 With my mom (Photo by Dan Rauchwerk)

As part of Wandering Jews of Astoria’s A Channukah Bush Grows in Astoria: A Jewish Storytelling Show, I read from Chapter 1 of Punk Rock Hora, recounting when I saw Jewdriver play on the first night of Hanukkah in San Francisco in 2006. As I blogged about last week, Jewdriver are still playing Hanukkah shows all these years later!

I wore a Jewdriver T-shirt. 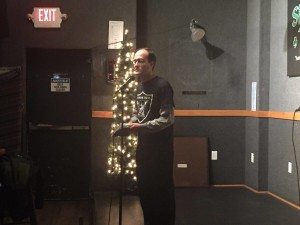