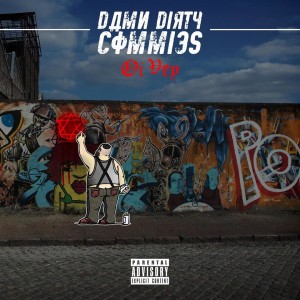 Damn Dirty Commies’ Oi Vey is a pithy album. If you don’t count the two comedic interludes and the one rap bonus track, there are just three songs, taking up less than five minutes combined. At a time when Kanye West can offer up seven songs as an album, let’s not debate whether it’s an album. The Philadelphia-based “Angry Jew Punk” group don’t need more songs to pack a punch—especially in the face of a Nazi.

Oi Vey kicks off with a vulgar and violent take on “Hava Nagila.” The catchy chorus boasts:

I’ma punch a Nazi in the face Oi!

I’ma start a moshpit in this place Oi!

The ensuing lyrics creatively threaten Nazis. In a phone interview on Thursday, singer Oi McVey called the lyrics “almost prophetic.” His run-ins with neo-Nazis date back to his teen years in the West Philly punk rock scene. Damn Dirty Commies released Oi Vey in July 2016—a half-year before Donald Trump was inaugurated as president and, on the same day, an anti-fascist (antifa) protester punched alt-right leader Richard Spencer in the face. Oi McVey sang about punching Nazis in the face before it was in vogue. “You see all those alt-right guys getting punched in the face, like Richard Spencer, and I was talking about this before that happened,” he said.

Oi McVey noted that carrying knives for self-defense against Nazis was common in antifa circles. He clarified that his “artistic expression” was “attacking the idea of Nazism, verbally with a knife.” He said, “Taken literally, obviously you don’t want to go around stabbing people, but if you have to defend yourself, that’s another ballgame.”

Also notable in the “Pin the Knife on the Nazi” lyrics is that Oi McVey proudly embraces the label “Zionist.” He lauded the Israel Defense Forces as an example of how Jews can be tough, in contrast to stereotypes portraying Jews as “weaklings and pathetic nerds.” He added:

I want Israel to exist. If I have grandkids … even my nieces and nephews deserve to see a place like Israel. … It’s an amazing feat that Theodor Herzl’s dream was realized and is living and breathing, despite so much turmoil and effort to destroy it. Even if you don’t agree with all of Israel’s policies, which I don’t … I won’t 100% turn a blind eye. … At the end of the day, I’m a Jew. Israel is the last Jewish place to be on the planet. It’s the size of New Jersey. Can we just have this New Jersey–size place?

“Hanukkah” celebrates the glowing Hanukkah lights and portrays Santa Claus in a not-so-glowing light. Oi McVey loathed Christmas songs and wanted to add to the Hanukkah repertoire. He explained, “There’re no good Hanukkah songs, except that Adam Sandler song, and even that gets terrible after a week! I wanted to represent from my disdain for holiday anthems and lack of representation.”

What do all three songs, the album title, and the singer’s stage name have in common? The word “Oi!” keeps popping up. “Oi!” is associated with skinheads, many of whom are racist and anti-Semitic, in contrast to the Yiddish “Oy!” Oi McVey explained that he was reclaiming the term:

Skinheads took the word “Oi!” and ran with it as their battle cry or their excitement. And I wanted to parody that—maybe ruffle a couple of feathers. I had to take it back for the Jews because it’s ours!