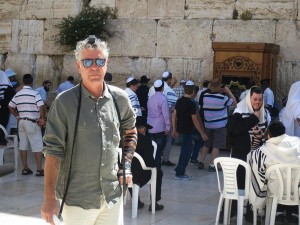 Anthony Bourdain wearing tefillin at the Western Wall in 2013

After celebrity chef Anthony Bourdain committed suicide today, I was surprised to learn that he was Jewish and had a punk background.

Bourdain was Jewish on his mother’s side. When filming in Jerusalem in 2013, he reportedly said that he “was raised without religion. One side of the family long ago, Catholic. I think. The other side, Jewish. I’ve never been in a synagogue. I don’t believe in a higher power. But that doesn’t make me any less Jewish.”

Ramones drummer Marky Ramone remembered Bourdain as “a true punk” and “a talented, punk-rock chef.” Rolling Stone recalled that Bourdain was “a punk rocker who used to scam his way into CBGB shows by cooking meals for the bands.” Here’s an excerpt from their article:

His passion for music was a crucial part to his appeal …. He was into … the New York Dolls: “Johnny Thunders guitar made life worth living again and gave permission to everything good that followed, like New York punk. Joyously nihilistic.” He approached music with the same opinionated truculence. He idolized the Ramones, dedicating his book The Nasty Bits to the late Joey, Johnny and Dee.

Did all that make Bourdain a Jewish punk? Technically, yes. The Jewish part might have been incidental. The punk part was not just his taste in music from when he was younger but an ongoing interest, influence, and attitude.

Until today, I had largely tuned out Bourdain. Not only did he boldly champion meat-eating, but he offensively scorned vegetarianism and veganism through the years. It was with an open mind that I read this Facebook post from Karen Dawn, who runs the media-focused animal advocacy group DawnWatch, in reaction to Bourdain’s suicide:

I am heartbroken by this. Yes, he ate all manner of living beings—as most people do. And yes, he had previously expressed an antithesis to vegetarianism and to animal rights people …. He also said on air that he couldn’t imagine why anybody would want to shoot a beautiful animal. And he was becoming increasingly veggie-friendly. I honestly sensed that he was an animal advocate in the making.
He was erudite and adventurous and warm.
With his explorations of different cultures, he was an antidote to the xenophobia that is taking over the world.
What a sorrowful end to a fascinating life path.

In response to a comment saying she’d gone too easy on him, Dawn pointed out that Bourdain’s views seemed to be evolving. She explained, “If we don’t welcome society’s evolution, if we hold people to their pasts, then we will have a nice little elite vegan club rather than a new relationship with other species.” She added, “He wasn’t yet where we want him to be, but people do make surprising changes and I just have the sense that Bourdain was headed, slowly, in the right direction.”

Was Dawn right about the direction Bourdain was going in? I don’t know, but it’s interesting food for thought.

While I might not have any interest in watching Bourdain’s TV show that glamorizes eating animals, I appreciated journalist David A.M. Wilensky‘s take:

Here’s what Bourdain taught me about the form of first-person journalism I like to do:

He never told you he disliked the food. He told you *about* the food. He told you what it means to the people who make and eat it. He told you about unusual ingredients and preparations, and gently urged you, the viewer, to try something outside your comfort zone …. Yet he did it all from a first-person perspective as an expert who was also open to the unknown. He did it with all with a respectful mischief in his eyes.

If nothing else, I can see that there was a lot more to Bourdain than the off-putting person I’d dismissed.