I’ve written fifteen punk-related articles for Jewcy in the last two years (plus more in 2009 and 2010). I’m particularly proud of what I now consider to be a complete series, which explored Jewish punk songs vis-à-vis Jewish holidays. Published between September 2016 and today, these nine articles cover a wide range of holidays and occasions (including some you probably haven’t heard of!) and feature songs by nineteen different artists.

There are two artist-specific articles (Schmekel for Tishrei and Moshiach Oi! for Shavuot) and seven multi-artist playlists. Yidcore had seven songs total (one on each multi-artist playlist), which isn’t surprising. As I’ve noted elsewhere, Yidcore’s “music continues to have relevance year-round,” showing “why punk rock is the perfect approach to Jewish music.” Schmekel had the lead with eight songs and Moshiach Oi! weren’t far behind with six, in large part because there were distinct articles exploring multiple songs by those bands. As I wrote in the Schmekel article, the band saw holidays “as a resonant, familiar path to discuss” Jewish experiences. Through the years I’ve tried to show that Jewish punk artists have something to say, and holidays are often the most timely opportunity to do so.

Here are the articles and the bands that were included:

Jewcy is going on hiatus at the end of the month. The last two years have been a fun ride. A huge thank-you to Jewcy’s editor, Gabriela Geselowitz, for her receptiveness and support when I kept going back to the well—especially for the Passover sequel and the series finale! 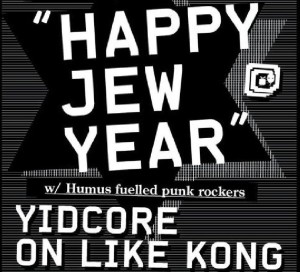