DIY Shavuot Learning Fest, Including My “Vegetarianism in the Jewish Tradition” Presentation

Wandering Jews of Astoria hosted a learning fest for Shavuot last night. While I’ve enjoyed the massive, all-night version at the Manhattan JCC in years past, it was more intimate having a dozen people in a board member’s living room. In a very DIY manner, community members taught—and learned from—each other.

While all my Jewish presentations since 2013 had focused on Jews and punk, I dusted off my “Vegetarianism in the Jewish Tradition” presentation, which I gave in different iterations between 2006 and 2010. My Biblical analysis, about how vegetarianism is preferable based on Jewish teachings, didn’t change much. I updated statistics about animal agriculture and the number of vegetarians/vegans in the U.S. and Israel. The Israeli vegan population has grown by leaps and bounds since 2011! I also updated one of my jokes, considering what else happened yesterday:

Dominion does not have to mean ruthless domination. The Queen of England has dominion over the English people. But at the Royal Wedding today, she didn’t round up her subjects, confine them to factory-farm sheds, and slaughter them for food!

The session after mine addressed Yiddish from a socialist/radical perspective and included a sing-along of “Barikadn,” which I know from the klezmer-punk-metal band Klunk. Another explored refugee issues and #MeToo vis-à-vis the Book of Ruth.

The vegan highlights of the potluck were strawberry-cherry-plum cheesecake and Torah-shaped cookies, with DIY decorative icing. (Thanks, Lisa!) Both were based on Isa Chandra Moskowitz recipes. 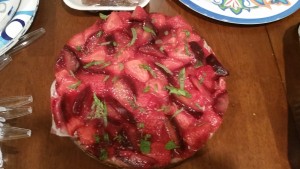 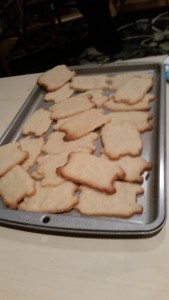