Tu B’Shvat, the Jewish New Year for the Trees, is an opportunity to embrace veganism and environmentalism. I’ve enjoyed many Tu B’Shvat celebrations through the years, as recently as last night. The highlight was in 2008, when instead of a seder (which means “order”), I hosted the Tu B’Shvat Disorder! How punk is that? How pun is that?

During my freshman year of college, I went to Chabad House one seemingly random Friday night and was delighted to find 44 types of fruits and nuts instead of the typical chicken carcass at the center of the table. From that moment on, Tu B’Shvat was my favorite Jewish holiday! 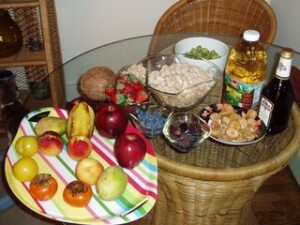 In 2007, when I laid everything out on the table, I couldn’t help but think that the colorful collection was truly beautiful. We enjoyed pineapple, coconut, pummelo, uniquefruit, grapefruit, mango, plum, nectarine, persimmon, apple, pear, peach, kiwi, strawberries, blackberries, grapes, dates, walnuts, Brazil nuts, almonds, and filberts. 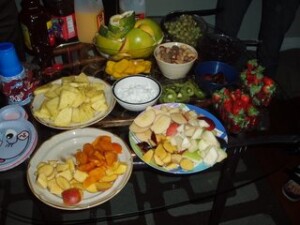 In 2008, I hosted 10 people for the Tu B’Shvat Disorder!, the biggest of the gatherings. This wasn’t quite a seder. We didn’t explain the significance of each part of the meal. We could’ve been more observant without sacrificing our punk rock DIY ethic.

The festivities began with the traditional Opening of the Coconut. This tradition began in 2006, when we had trouble opening the coconut. In 2007, we were all looking forward to giving it a go again, and one friend’s struggle to open the coconut was quite memorable. In 2008, another friend succeeded with an easy-open coconut rather quickly. The two coconut halves were scooped out by two brothers, who donned kippot for the ritual. 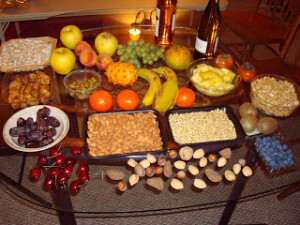 A decade before I worked on Punk Rock Hora, my “Horacore” mix CD provided the perfect background music for the Tu B’Shvat Disorder! It featured hora renditions from Yidcore, Golem, Me First and the Gimme Gimmes, Zydepunks, Vulgar Bulgars, Rootwater, and a techno version of “Hava Nagila.” 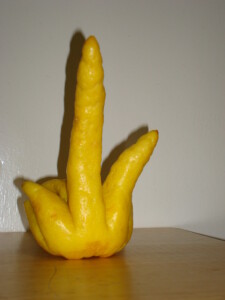 In 2011, I brought a Buddha hand to a Shabbat potluck around Tu B’Shvat. Here’s an excerpt from an article I wrote for PunkTorah’s defunct NewKosher.org:

This year’s I-can’t-stop-thinking-about-it fruit is the Buddha hand, also known as a fingered citron. … When I spotted a California-grown Buddha hand that appeared to be giving me the finger on Thursday—so close to Tu B’Shvat—I knew I just had to spend $3.14 for it.

The Buddha hand was a big hit at a Shabbat potluck the following night. We started amputating fingers off the Buddha hand left and right. One guy ate an entire finger (including the rind), and he put a little nub in his wine and called it sangria. Several of us gnawed into the flesh at the base of the fingers instead. We passed around the opened Buddha hand to appreciate the scent.