Punk Rock and Jewish Music as Part of a Larger Stew

The growing popularity of world music and fusion of musical styles from across the globe could be called the musical manifestation of globalization. In The Essential Klezmer, Seth Rogovoy noted, “By the end of the 1990s, klezmer was on the radar of ‘world music’ artists, who saw it as a genre worthy of exploration in the same way that Celtic, African, and Brazilian music had been for the past two decades.” Amid these varied combinations, some artists sought to fuse multiple musical styles that included both punk rock and either klezmer or another take on Jewish music. These acts illustrate just how far both have come, so that it was not surprising that both would be part of a larger mix—albeit often in ambiguous ways. In most cases, making Jewish music (i.e., music as Jews, by Jews, and for Jews) was not the goal. 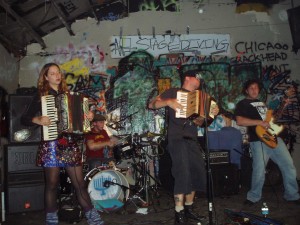 The Zydepunks played at 924 Gilman Street in Berkeley, California, on the second night of Hanukkah in 2006.
Photo by Michael Croland

New Orleans’ Zydepunks combined punk rock with zydeco, klezmer, and Celtic folk music. The Zydepunks’ music, particularly 2008’s Finisterre, is the most magnificent example I’ve heard of seamlessly blending different styles of folk music with punk rock. The band consisted of talented musicians who rocked out and were a sheer pleasure to listen to.

Zydepunks singer and accordionist Juan Kuffner said, “I think that there is a common spirit that pervades folk music—the songs are real, the music is real because it speaks to us over thousands of years of oral tradition and human experience, no matter what culture it’s rooted in.” Yiddish was one of the languages that Kuffner sang in, in addition to English, German, French, Spanish, and Portuguese. Kuffner was under the impression that he likely had Spanish Jewish ancestry far back on his mother’s side, but it was the band’s other accordionist who got interested in klezmer and brought it into the Zydepunks.

Alongside Yidcore and Jewdriver, the Zydepunks participated in a punk Hanukkah tour in 2006. Kuffner said that the group was planning to play klezmer songs “more than usual” for that tour. On the opening night, Kuffner introduced the Zydepunks as “the honorary gentile band from Louisiana.” Thanks to the Zydepunks, the first mosh pit broke out just half a song into the tour. On the second night of the tour, the Zydepunks’ bassist proudly wore a yarmulke and a member of Jewdriver joked that he’d be Jewish by the end of Hanukkah.

Balkan Beat Box was one of the premier acts on JDub Records, which made the band a microcosm of a question often asked about JDub: What made it Jewish? Surely it had something to do with bringing the music of two Israelis—Balkan Beat Box co-founders Tamir Muskat and Ori Kaplan—to an American audience. “What makes the music [Israeli musicians are] playing less Jewish than klezmer music from Eastern Europe …?” pointed out music blogger Jack Zaientz. “They [Balkan Beat Box] sound intensely Jewish because of that Israeli/Middle Eastern sensibility to them, and the issues that concern them, but that’s a new form of Jewish music.” When asked whether the group’s music was Jewish, Balkan Beat Box’s Tomer Yosef said, “Yeah! Also Jewish,” but “not like traditional Jewish.” For JDub artists and events, there was no agenda of promoting a specific strain of Judaism. In a New Voices article, JDub founder and executive director Aaron Bisman explained that he was not concerned about whether JDub’s audience would “become religious, or join a synagogue, or donate, or whatever.” Rather, he wanted Jewish 20- and 30-somethings to “think Judaism matters, in whatever way.”

As for whether Balkan Beat Box’s music could be classified as punk, one would have to apply the term liberally. Balkan Beat Box’s “Ya Man” had a heavy guitar part reminiscent not so much of punk rock but of Gogol Bordello’s Gypsy punk. “Balcumbia” had speed and intensity at times that suggested punk energy. Entertainment Weekly described Balkan Beat Box’s music as “fueled” in part by “a big dose of punk ’tude [attitude].” As Kaplan put it, “It’s punk-rockish rather than some sort of world-music virtuoso jazz. It acts like a soundsystem, it has the dub, the punk—it speaks to people ….”

For those keeping score at home, fusion bands have incorporated Jewish music and punk rock into larger mixes that also include zydeco, Celtic folk music, electronic music, hip-hop, Gypsy music, tango, ska, jazz, reggae, polka, Balkan music, Ching Dong, and various strains of rock. The possibilities of how punk rock and Jewish music could be part of a larger fusion approach are endless.